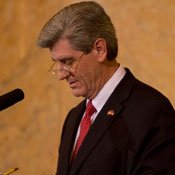 Lt. Gov. Phil Bryant championed the failure of House Bill 1533, which would have required state-issued ID at the polls and allowed early voting.

Unpopular parole and pardon decisions drew the ire of senators March 5, as they nearly approved requirements for greater accountability for the state Parole Board and the governor. Senators passed a modified version of House Bill 2, but Senate Republicans held the bill on a motion to reconsider.

Unpopular parole and pardon decisions drew the ire of senators March 5, as they nearly approved requirements for greater accountability for the state Parole Board and the governor. Senators passed a modified version of House Bill 2, but Senate Republicans held the bill on a motion to reconsider.

Sen. David Baria, D-Bay St. Louis, said that the hold would give Gov. Haley Barbour time to persuade senators to vote against his amendment. Baria's amendment would require that prior to pardoning a felon, the governor provide notice to local officials for a public hearing in the county where the felony was committed.

"Whether that changes what the governor wants to do is another matter," Baria said. "He still has the right to pardon. But at least people will have an opportunity to be heard."

The governor's right to pardon felons came under scrutiny last year when Barbour released murderer Michael David Graham, who, after years of stalking and harassing his ex-wife, shot Adrienne Klasky Graham in 1989 at point-blank range with a 12-gauge shotgun, virtually shooting her head off.

The Mississippi Parole Board previously denied Graham's parole, but Barbour, who is not currently required to consult with the board before granting relief, suspended Graham's sentence and released him despite those expert opinions.

The House version of HB 2 would have required the Parole Board to issue an opinion on any prospective gubernatorial pardon. The Senate Corrections Committee struck that provision, however, and senators approved another amendment restricting the parole board's authority. That amendment, sponsored by Sens. Billy Hewes, R-Gulfport, and Michael Watson, R-Pascagoula, would require a unanimous vote from the parole board to release anyone convicted of capital murder or a sex crime, rather than the simple majority required now.

Much of the Senate's focus on the parole board stemmed from recent public outrage over the parole of Douglas Hodgkin last month. Hodgkin brutally raped and murdered pregnant Ole Miss student Jean Elizabeth Gillies, and the state of Mississippi convicted him of capital murder in 1987.

Sen. Alan Nunnelee, R-Tupelo, expressed some of the public frustration while introducing an amendment that he said would send "a very loud signal to those three members who voted to let this man out that we don't like what you did."

Senators voted down Nunnelee's amendment, which would have let the Parole Board's mandate expire Aug. 1 of this year.

Stimulus Measure Passes 69-52
After hours of debate, lawmakers passed House Resolution 64 on March 5 by a 69-52 vote, signaling the Legislature's intention to accept all federal stimulus funds. Barbour has indicated that he would decline federal funding for unemployment benefits.

Representatives voted along party lines, with Democrats arguing for the state's economic needs and Republicans taking the governor's position.

"This ought to be a time of thanksgiving, praise and an attitude of gratitude," Rep. Steve Holland, D-Plantersville, said in support of the resolution.

Rep. Bill Denny, R-Jackson, who voted against it, said that Democrats were spending time on a "feel-good measure" with no legislative significance.

"That exercise was pontificating in front of the camera," Denny said. Moreover, Denny said, it would be fiscally irresponsible to accept the unemployment funds.

The resolution has gone to the Senate Rules Committee, where a similar Senate resolution, SR 615, is stuck in limbo. A group of 11 Democratic senators called on Rules Committee Chairman Billy Hewes to bring the measure up for the committee's approval Monday. The resolution urges the governor to accept all federal stimulus money available for Mississippi.

"Schwarzenegger, Republican (governor) in California, is taking everything with both hands," Sen. David Jordan, D-Greenwood, said. "And here we are turning down money, the poorest state in the nation."

Killed Bills
Senate Republicans chose to kill a political effort on March 3 that they've been championing for years because they were unwilling to offer early voting to Mississippi residents.

The deadline for committees to consider bills originating in the other chamber was March 2, and Republicans like Southaven Sen. Merle Flowers and Lt. Gov. Phil Bryant stood against the passage of HB 1533, a bill mandating voters carry state-issued voter ID to the polling place.

"Nobody wants photo voter ID more than I do," Bryant said in a statement. "It was part of my campaign as lieutenant governor and has been the cornerstone in my legislative agenda for the past two years. However I am not willing to  accept early voting and other provisions that compromise fair elections."

The Senate Appropriations Committee also killed a House bill creating a pilot sex-education program in the state. House Bill 234 died in the Senate Appropriations Committee, chaired by Nunnelee. It had already survived the Senate Education Committee, chaired by Sen. Videt Carmichael, also a Republican, of Meridian.
Get daily breaking news at jacksonfreepress.com and @jxnfreepress on Twitter.