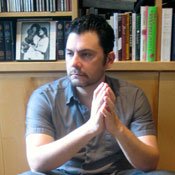 The New Yorker editor and novelist Ben Greenman's new book, "Please Step Back" (Melville House, 2009, $16.95), tracks the life and career of funk-rock star Robert Franklin, a.k.a. Rock Foxx, a fictional character based loosely on Sly Stone. Hailed by George Pelecanos as "a literary funk-rock novel with weight and power," "Please Step Back" is only moving forward. I recently spoke with Greenman, with whom I worked at The New Yorker magazine, about his latest effort.

• It seems like "Please Step Back" is a bit of a departure from your other work. Did you just wake up one day and say: "The world really needs a literary funk-rock novel. I guess I have to write it"?
Well, sure, sort of. I had to get it out of my head so I could get on to the next book. I mean, that's kind of a weird premisethat the world needs any book. It was more a matter of my needing this book, needing to write it and deal with my interest in this kind of music and this character.

• Where did your interest come from?
From the music, first of all. Since I was 9 or 10 years old, I was obsessed with funk and soul music of the early '70s. That (interest) didn't dissipate. I tried to write a biography of Sly Stone, which didn't work out, so I decided to write it as a novel instead. Weirdly with Foxx though, it actually ended up being a very autobiographical character: he worries about creativity, about marriage, the way society shifts around him too far in one direction or the other.

• Was it hard to write a black character? Were you worried about that?
No and no. I mean, I connected with artists like this from very early on; maybe it was before I even thought of them as black or myself as white or Jewish or anything. When it came time to write, I really felt like these were people I knew.

• Talk more about your interest in this time period specifically.
[Y]ou know, we have the wars in Iraq and Afhanistan and the recession, and a lot going on, but at the same time I find it to be very boring in many ways as opposed to then (the 1960s). The reason that I'm very interested in that particular time (is)  that's the last time that all of these kinds of thingsrace, pop culture, legitimate politics, youth culturewere the most closely smushed together, and the most interesting to try and untangle.

• So what's next?
Well, either a collection of stories or another novel or a book of essays. All of those are close to done. I have to do that thing where you talk to your agent and see which book they think makes sense next, and then I guess decide if I think that makes sense, too.

"Please Step Back" is available at Lemuria and http://www.pleasestepback.com, which also has a recording of a track written by 70s funk star Swamp Dogg, with lyrics Greenman wrote for the novel.