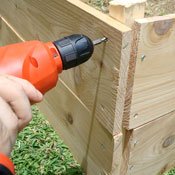 Growing your own food is back in style. The popularity of books like "The Omnivore's Dilemma" shows that people are more concerned about where their food comes from. Growing organics is much cheaper than buying them, and even a natural-foods market can't match the taste of fresh produce from the garden.

This summer, we chose to plant a variety of bell peppers, squash, tomatoes and herbs in a raised garden bed. Here's how to do it.

1. Choose an appropriate area for a raised bed and scope out the measurements. You want to build the bed on relatively level ground that gets enough sun for what you want to plant, typically 6-8 hours per day. A two-feet-wide reach is ideal because that's about how far you can extend your arm to care for your plants.

2. Gather your materials and tools. Many of the necessary tools are everyday household items. Others will require a trip to your local hardware store.

Materials
Rot-resistant boards
• How many boards you use and their length depend on how large you want your bed to be. Ours was 4 feet by 8 feet. We used two layers of 1-inch-by-8-inch-thick boards set on their sides, so the walls were 16" deep when stacked on top of each other. The had the boards cut to lengths of 4 feet and 8 feet, with four boards of each dimension.
• Cedar is more rot-resistant than pine and other cheaper woods, and it repels insects, especially wood-eaters. Do not buy pressure-treated wood, which can leach heavy metals into the soil. It's easy to spot because it's darker than untreated woods.

Four square wooden posts with ends shaped into points
• These posts will anchor the four corners of the bed. Buy a couple extra if you plan to place supports in the center of your boards to keep them from bowing. Plan for one third of the post to go into the ground and two thirds to rise above it, and mark this line with a pencil. Cedar is best, but we used pine posts because cedar was unavailable. We bought an 8-foot, 2-inch-by-2-inch square post and had it cut into four 24-inch posts. We used an ax to chip the ends into rough points.

Soil
• Based on the dimensions of your bed, calculate in cubic feet how much you'll need to fill it (length x width x depth). Organic soil normally costs less than $7 per 1.5 cubic foot bag. Plan to make a mix of half soil, half compost.

Compost
• The city of Jackson landfill in Byram gives compost away for free. Load it yourself or pay $10 for the staff to load it for you.

3. Drive corner posts into the ground. To start, drive a stake into the ground on one corner of the bed area to use as a reference point. A sledgehammer works best, though the flat end of an ax works, too. Use one of your boards to measure the distance from your first post to where you should put the second. Mark that spot. Pound in the second stake there, and repeat this step until all four stakes are in the ground.

4. Attach your first layer of boards. Build the bottom layer of boards first. Keep in mind that you won't be drilling boards together; instead, you'll be drilling each board into a post. Place one board flush against the outside of two stakes, lining it up so you can drill through it into the middle of the stake. Use the drill bit to drill one hole toward the top and one toward the bottom. Change to the Phillips screwdriver bit and put screws into the holes until they're securely in the wood. Use a regular screwdriver for final tightening if needed. Repeat until you have a complete first layer of boards.

I can't stress enough how awesome Hutto's Garden Center is. If you don't get out to Ellis much, I promise it's not bad or anything. It's a huge store, super clean with well-labeled aisles. The whole staff is really knowledgeable and the pricing is great. Hutto's makes their own organic bedding soil mix, which they sell for $3 per 40 lb. bag. Home Depot/Lowe's has comparable bags that weigh 50 lbs. for $7. When you're buying like 15 bags like we did, that savings adds up huge. Their greenhouse is also the best I've seen. They have several varieties of plant from seeds to seedlings to established starter plants. We planted really late this year, but we got the Heatwave hybrid tomatoes that should crank out some fruit even in this heat.

I don't know why I'm just now seeing this, but I am going to have to check out Hutto's - they have been in Jackson for-EVER, but I can't say that I've been there before (I only recently got into gardening). I love the idea of a raised bed, and as soon as I have a place with a yard, I'm going to make one of my own!