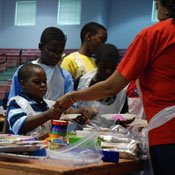 Bryson Williams, a stocky 7-year-old, is devoted to glitter. He grabs handfuls of the stuff from a paper plate and drops it onto a plastic one, his eyebrows pushed together in concentration. Slowly but surely, he drowns the plate in an inch-thick layer of sparkle. Finally, the finishing touches: an orange feather, a magenta feather and two black plastic spiders. His masterpiece is complete.

Like many artists, Bryson likes to get messy. The day has barely begun, and his striped T-shirt already has some extra color. He's supposed to be wearing a clear plastic smock like all the other kids, but his has disappeared for the time being. When a camp volunteer comments on Bryson's paint-splattered pants and shirt, he retorts: "I don't care. All we gotta do is wash it off."

Bryson is one of 50 6- to 14-year-olds who participated in RAW Kids Art Camp"RAW" stands for "ready and willing"at Tougaloo College June 13-15. RAW Kids, held in the gym at the Owens Health and Wellness Center, was a new addition to the 13th annual Tougaloo Art Colony this year, which featured classes taught by guest artists and evening "art talks" for instructors and participants.

"I thought, 'This is perfect!'" Gilbert says.

Ready and Willing
Johnson, a 41-year-old mixed-media artist who paints portraits with her feet, teaches at Prairie View A&M University in Prairie View, Texas. She has led RAW Kids at churches and inner-city camps in Houston.

Using low-cost supplies like picket-fence posts, Johnson allows kids to "create the crafts that your mother keeps in the cabinet forever."

"I don't like to send them home just coloring," she says. "I want it to be a unique experience."

RAW Kids has no dedicated funding source, Gilbert says. Two Lowe's stores in the metro donated gift certificates, which allowed the camp to purchase 50 picket fence posts. The kids painted and clothed the fence posts to create "people" as unique as they are. The Madison County chapter of Delta Sigma Theta Sorority donated some snacks for the kids, and Gilbert bought some snacks herself.

The Mississippi Arts Commission, Greater Jackson Arts Council and other donors collectively fund the Art Colony as a whole.

Today, after the kids have adorned their plates with paint, paper flowers, army figures, shells and feathers, Johnson makes her rounds. Stopping at each table, she paints a glaze over the plates so the decorations will stick.

As Johnson covers 6-year-old Animesh Kumar's plate with glaze, Bryson walks over and looks up at her. He is impatient.

"This isn't even your table," Johnson tells Bryson. She says it kindly, but she means business. "Go back to your tableand don't you get another lick of glitter."

Bryson walks away quickly, swooshing as he goeshe's wearing his smock again.

Through Your Eyes
Gilbert holds a small sketchpad in her left hand and, with her right, finishes a still-life drawing of two bottles that stand on a box on the table in front of her. Her pencil, guided by the rotations of her wrist, makes smooth, even strokes on the paper.

"(As an artist), you see through your eyes, rather than with your eyes," she says as she completes her drawing.

Four young people sit at the table with Gilbert and listen to her calming voice as they draw the two bottles. When the older RAW Kids participants finish decorating their plates, some of them come to Gilbert's table and create small paintings, realistic and abstract.

Divine Creation and Testing
When Gilbert takes a break from her still-life lesson, I ask her why art is such an important part of a child's education.

"I believe I came into this world to be an artist," she says. "Yet, when I got into the school system, there was nothing in place to enhance my talents. We were created. Our divine creator gave us a little bit of himself, so we can all do that. But (without art education), all that creative energy gets turned in a negative direction.

"You want to talk about drop-out rates?"

Gilbert believes more kids would finish high school if the arts were as much a part of the curriculum as math and science.

"Art connects children with their culture," says Carolyn Jolivette, director of school reform initiatives at Parents for Public Schools Greater Jackson. "It also gives the teachers an opportunity to try something different, to reach every child. It deals with children who are not traditional learners."

Parents for Public Schools is the convening partner for Ask for More Arts, an organization that has implemented art integration into 21 of the 38 public elementary schools in Jackson.

"We have a culture of testing now (after) No Child Left Behind," Jolivette says. But arts-centered education focuses on "children's ability to learn at every level, rather than just giving them information and testing them."

They Never Have to Stop
On Thursday, July 16, as Art Colony participants' work hangs in the nearby "Hot Art Exhibit" in the hallway at the Owens Center, the "RAW kids" and their parents gather in the gym for their own exhibit and reception. The glaze on the kids' painted plates shines under the ceiling lights. Their tiny "islands," complete with palm trees made from drink umbrellas, form happy archipelagos on the tables. Their "fence post people" have been arranged into a colorful "friendship fence" surrounding the exhibit.

While most of the families form a line at the buffet tableTougaloo cafeteria staff prepared chicken fingers, pasta with meat sauce, tofu, rice, pastries and lemonade for the receptionsome kids can't wait to show their parents what they've done. They spot their fence-post people and pose behind them for photos. They find their plates and islands and chatter about them excitedly.

Maybe these kids will grow up to be "great artists." That's what 7-year-old Celeste Gilbert, one of Johnnie Mae Gilbert's three grandchildren who attended the camp, told me about her "grammy."

"I'll tell you a private thing about that," Celeste says quietly. "She never stops doing art ever.  Do you know how a great artist is made? Their brains are full of all kinds of wonderful art, so they never have to stop."

"We need some external funding," she said after the reception, "because the Tougaloo budget cannot fund it.  We need lots of volunteers."

But in the end, Gilbert is hopeful. "I believe it's going to happen again," she said.