‘Holding Up the Mirror' 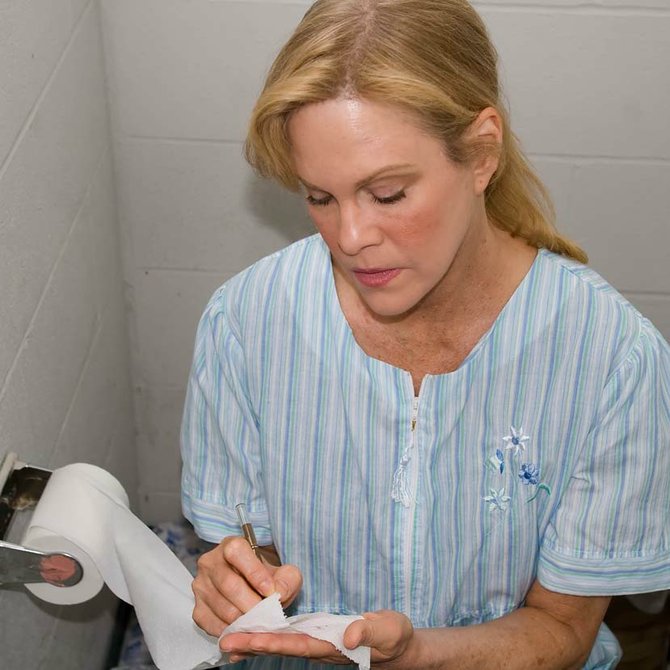 Jo Ann Robinson portrays a battered woman journaling from a bathroom in "The Scutley Papers. Photo by William Patrick Butler

In all art, but particularly in theater, there's a classic adage: It's not just about the production; it's about the process. Digging deep into that process, and the impact that art can have on life and community, is a treat. It's just the treat I enjoyed when I sat down to ask four of my favorite local theater collaborators how the performance arts can address social issues, and about "The Scutley Papers," a new play that subtly but powerfully surfaces issues of domestic violence. The play premieres Friday night at Hal & Mal's as part of the JFP Chick Ball Weekend.

Jo Ann: I think it was (Konstantin) Stanislavsky who said that great theater should hold up a mirror to society. And I think that's what we're doing with shows like this: holding up the mirror.

Richard: It makes things more relatable. I'm an avid reader, and when you read a book, you take in the story; but when it's performedwhen you see someone experiencing somethingwell, then you really experience whatever it is with them.

Francine: In ("The Scutley Papers") there's this ugly situation, but it's brought up with beauty. The main character's poetry is a way out for her, but it's the way in for the audience. You can take in (the ugliness), because there's also all this beauty and humor.

Diana: It's a way in. You plant a seed, you know? When you share something through a performance, it can get someone thinkingmight start to change an opinion or curb a negative view.

• Surfacing is good, but can performance art really can bring about change?

Diana: Of course. Look at the "Vagina Monologues." It started out as a show, and then it became this whole movement, performed in so many places every year, raising millions of dollars, empowering women, affecting real change.

Richard: I never thought about it like this until you asked the question, but there's that saying, "Pain shared is pain halved, joy shared is joy doubled." That's theater. You can watch a really happy musical, and the whole audience walks out together feeling great. On the other hand, if there's pain onstage and someone in the audience really feels that pain, and they see it represented, it's halved. Either way, someone, or the whole audience, can be changed.

Francine: I also think about things like "The Laramie Project" (a play in which actors researched and then performed the aftermath of Matthew Shepard's murder). ... Going into a community like that and sharing those real storiesthat community's story, onstage, with other communitiesit's amazing the impact that can have.

• What makes "The Scutley Papers" a powerful show?

Jo Ann: It's just so real. It's well-crafted. It's really funny, even though it deals with such serious issues. I refuse to give people too many details about the show when I'm telling them to come see it; I don't want to give it away. They just have to come experience it. So to get them interested, I just tell them it's about a woman writing her memoirs in a bathroom with an eyebrow pencil.

Diana: Setting it in the bathroom, which is the most intimate room in your entire home, it really gives it that feeling of intimacy, a real connection with the character. When you think about it, she's literally purging her story to the audience, and the setting is truly a genius device.

Francine: I think it's really honest. The abuse in the show is subtle, and (it) builds. It's not hitting you over the head with it. The character in the show has to get to the truth slowly, and the audience gets to the truth along with her.

"The Scutley Papers," by Jamie Wax of Baton Rouge, won the 2009 Eudora Welty New Play contest at New Stage Theatre. The cast and crew will present it Friday, July 24, at 7 p.m. at Hal & Mal's as part of the Chick Ball weekend; $15 admission includes entry into a singer-songwriter showcase following the play. Buy a weekend pass for $25. Visit jfpchickball.com to buy tickets.

All, be sure to pass the word about "The Scutley Papers"; it is going to be an amazing kickoff to Chick Ball weekend Friday.