An Apple or a Yogurt a Day? | Jackson Free Press | Jackson, MS

An Apple or a Yogurt a Day? 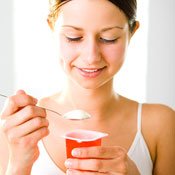 It all started with a cold, then a cough. By the time I saw my physician, who was more than happy to share her "if-you-had-seen-me-sooner" lecture, I realized that even with a hefty antibiotic dose, an inhaler and other medicinal potions, this gunk had taken hold of my physical being. I was sicksicker than I had been for a long time.

I'd overheard conversations in the grocery store about sick kids and spouses. Colleagues expressed sympathy even as they gingerly moved away.

"There's some nasty stuff going around," they said.

Yet somewhere between snorting the Advair disc and downing a few OTC meds, I realized how healthy I had felt before I got sick. Not just wellhealthy. Weeks before I succumbed to this illness, I had been in Greece for most of the summer eating a daily regimen of ridiculously thick Greek yogurt and local honey.

As I was recovering, a physician acquaintance of mine said that she and her husband, also a physician, had been partaking of probiotic dairy drinks daily and hadn't been sick in two years.

Probiotics are not antibiotics. Probiotic means "for life." The World Health Organization defines probiotics as "live microorganisms, which when administered in adequate amounts confer a health benefit on the host" beyond nutrition. In other words, these are bacteria introduced into the digestive tract that provide health benefits. Scientists have identified more than 400 different probiotic strains, the most common of which are Lactobacillus, Bifidobacterium and non-pathogenic strains of Streptococcus.

Are probiotics new? The word, yes; the concept, no. We used to live in a dirty world. Humans ingested bacteria from the soil where they grew food and from animal's unpasteurized milk. Now farmers grow food in soils devoid of these bacteria, and with all our disinfectant products, we're purposely wiping out the beneficial bacteria we ingested naturally in the past.

Probiotics are trendy in the United States right now, but other cultures, from ancient Greece to modern-day Japan, have endorsed certain foods to produce beneficial results. Kefir, a Turkish word meaning "good feeling," is a fermented milk drink. It is believed that the prophet Mohammed gave the residents of the northern Caucasus Mountains grains of kefir to make a fermented "health" drink more than 1,400 years ago.

In this country, actress Jamie Lee Curtis is a spokeswoman for Activa, a Dannon Company product, promoted to "help regulate the digestive system." But not all probiotics have the Activa end result.

How do these other types of probiotics work? The key is balance. Research suggests that they help promote immunity in the digestive tract. The idea is to crowd the room with faces you do know so that strangers, some of whom may be violent, can't get into the room. This room, the digestive tract, is already filled with a complex system of 100,000 billion "good" and "bad" bacteria. By introducing good organisms into the gut, they out-populate the bad ones. And without the dangerous strains, the human host stays healthy.

To deliver probiotics, you need either a dry or refrigerated environment. Yogurt has a high water level, but refrigeration sustains the viability of its probiotics. Dairy products have also shown to balance the stomach's high acid content, which can harm probiotics.

Researchers have and are being conducting studies to prove or disprove the many health claims suggested by probiotic products. These studies have their own problems, however. As Dr. Mary Etta Moorachian, professor of Nutrition at Johnson & Wales University, clarifies, "Much of the challenge is related to the fact that in human trials, people are alike but still heterogeneous."

So more studies will be done. But the real proof may be in the pudding, er, yogurt. Years ago in Hong Kong, I got suckered into drinking a glass of snake gall bladder wine.

"This will keep you healthy for a year," the snake bleeder claimed. I didn't think that much about it at the time, and downed the substance. I didn't realize until 14 months later that I had not caught even one cold.

• In yogurts, look for the "live active culture" label.

• Horizon Organic Dairy includes lactobacillus acidophilus and bifidobacterium in all its yogurt and cottage cheese products.

Probiotics are certainly not new, but they are available in so many different delivery methods. Personally, I like probiotics in a supplement because they are more stable. You can eat a probiotic fortified cereal or granola bar, but how many beneficial probiotics are really adhering to your gut where they do their good work? Personally, I've been taking a probiotic supplement for a while now, and I haven't been sick yet. - Anna M blog.nutri-health.com