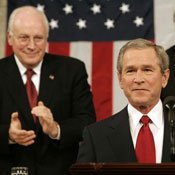 In his inaugural address, President Barack Obama spoke of uniting parties, bringing Americans together and working with the world to make a better life for us all. We agree wholeheartedly that we could all use a little unity right now, and we welcome the profound words of the incoming president.

We also believe that the people of the United States have some unfinished business with the Bush administration. One thing that should not be swept under the rug of "unity" is accountability for the outgoing administration officials.

One of the great hallmarks of the Bush legacy will be the divide-and-conquer Lee Atwater-style tactics perfected by former White House Chief of Staff Karl Rove. Particularly egregious was the way Bush and Rove politicized the Department of Justicethe legal arm of the Executive branchin a way that is antithetical to American values.

The same prosecution then pursued corruption charges against former Supreme Court Justice Oliver Diaz for allegedly helping Minor on some caseseven though Diaz didn't preside over any of the disputed cases. The U.S. Attorney's office then pursued a failed case against Diaz for tax evasion a few weeks after a jury found him innocent of corruption.

And it wasn't just Mississippi. Former Alabama Gov. Don Siegelman is lobbying Congress this week to continue its investigation of the U.S. Department of Justice's suspected war on Democrats over the last eight years. The Republican-led DOJ pushed a corruption case against Siegelman similar to that of Minor in that prosecutors had to show no proof of quid pro quo.

Obama said Tuesday that America should look ahead for the sake of unity. But if we don't hold Bush's team accountable for their political and moral excesses, we'll only allow bad history to repeat itself. Without change and accountability, what would stop a future DOJ, under the direction of one party, from waging political war against the other party, as the DOJ did during the tenure of U.S. Attorney General Alberto Gonzales?

Congress is currently filled with legislators who are eager to pursue investigations into the politicizing of the nation's Justice Department. We call on President Obama to let the investigations go forward, for the goodand for the unityof the country.

Moving ahead shouldn't mean forgetting the past. It means righting the ship of state and making sure that we never make allow any party to make these same mistakes again.

Do not forget that former Congressman Jim Traficant is among the people railroaded to jail by corrupt administrations. The administrations of both Clinton ("Janet Reno is a lesbian alcoholic using D.C. call girls.") and Bush tried to silence Traficant, but failed until the Bush Justice Department used a RICO style prosecution to thumbscrew every petty and not so petty crook in Northeast Ohio to get false testimony. Traficant chose to represent himself at trial. He did this partly because the lawyers he found were conniving with the prosecution and had to be fired and partly because he realized that the Justice Department prosecutors would make good on their threat to bankrupt him as a defendant - as has happened in other cases. Something needs to be done to fund Congressmen and Senators in their defense when attacked by politicized government agencies. This is necessary to protect our Constitution. It might help to begin by reopening Traficant's expulsion hearing. The so-called House 'Ethics' Committee was then dominated by a partisan fool who did not understand that his institution, the U.S. House of Representatives, was under attack. The Committee rubber stamped the Justice Department prosecution and did not permit Traficant to offer evidence and witnesses of his own. Those excluded witnesses included juror number eight, Leo Glaser, who became convinced that Traficant should not have been convicted after seeing CSPAN testimony by Richard Detore - who was bankrupted by the same prosecutor who attacked Traficant. Detore was found unanimously not guilty after successful defense by Plato Cacheris, but wound up more than a million dollars in debt. We wonder whether any member of the Committee on Standards and Conduct, including the new chairwoman, ever read the transcript of Traficant's trial?

People like Paul Minor should be prosecuted and spend their time in jail and stay there. There is too much bribery, racketeering and fraud and corruption in the justice system now and to get some of them off the street is a good thing.