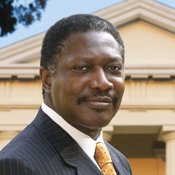 Mississippi Sen. John Horhn will officially announce his candidacy for mayor this afternoon.

Jackson mayoral candidate and Democratic state Sen. John Horhn has announced the first of seven town-hall style meetings called "Jackson Speaks." The purpose of the forums is to give Jacksonians in each of the city's seven wards the opportunity to voice "concerns and desires" for the future of Jackson.

The first meeting will be held at 10 a.m. this Saturday, Jan. 10, at Koinonia Coffeehouse on Adams Street, located in Ward 5 just off the Jackson Metro Parkway. Horhn invites all Ward 5 residents and Jacksonians interested in discussing the city's future to attend. The next "Jackson Speaks" meetings will take place Jan. 27, Jan. 29, Feb. 12, Feb. 19, and Feb. 26. Check JFPevents.com for info, including times and locations, as more details become available.

Is anyone going to this? The web site of the Coffeehouse makes it look like an interesting place.

Koinonia's great; they have good coffee and awesome light sandwiches for lunch.

Already starting out on the right foot. It's still early and things can change, but Horhn is my guy now.

It does look like Sen. Horhn is stepping out on the Good Foot! He seems confident and sure. He's not throwing around this statement and that statement and playing with people. He's stating his platform for everyone to hear and he seems to be doing so just because it's the right thing to do and not to proove anything to anyone OR to show anyone else up. So far so good! I like that in a candidate. Say what you mean, mean what you say and speak clearly and loudly as not to be misrepresented! That whole "let's keep 'em guessing" idea really pisses me off.

Queen601, who is/are the candidate(s) that is/are not announcing because "Let's keep 'em guessing"? This would really be sad and silly if there are people who intend to run, but, will not say because they want people to guess. This really sounds crazy to me. To date, there are many who have announced and have placed signs all over the City; however, there is not a single candidate who has formally filed papers. I imagine that people will be entering the races (mayoral & council) until the deadline which is sometime in late Feb/Early March.

I thought one of the news stations reported that four people had filed qualifying papers. Whitlow is the candidate who released a platform saying he will announce whether he will run at some later time.

Didn't hohrn support the civil rights building being put at tougaloo, i like his fire and passion but he has to explain that one to me.

Koinonia is fantastic; I was there last night. Probably the best laid out coffee shop I've ever been to, with several areas where you can meet semi-privately. Perfect place for small group meetings, and probably a really good place to take a date, too.

Heard it on WAPT just now: the four candidates who have filed qualifying papers are Horhn, Robert Amos, George Lambus and Walter Sloane, Sr. Given that half of Jackson has announced plans to run in this race, I can see why Facebook has a group "I am not running for Mayor of Jackson."

Well there is a new facebook group in town now: "Friends of Senator John Horhn for Mayor of Jackson." Go see it and join it!