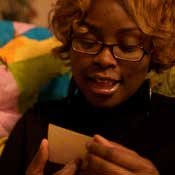 Quilter Ravin Hill, 28, in her home with her grandmother's quilt.

In every class Ravin Hill took during her extensive undergraduate and graduate studies, she found quilting. In her sculpture class, she sculpted a sewing machine out of terra cotta clay. In photography, she photographed a quilting circle at the Tougaloo Community Center. She even managed to make a quilt in her Spanish class (it still hangs in the Tougaloo Foreign Language Lab today). To Hill, "Quilting is the ultimate metaphor for life. The fabrics that you select should mean something to you, and the stitches are the heartbeat of the quilt, its essence," she says.

Hill's grandmother, Weberta Hawkins, taught her to quilt when she was 12 years old. Hawkins learned the art from her mother, and so on for five generations. Hill's great-great-grandmother, Maggie Young, was a slave. The patterns passed on to Hill, such as Cross-Roads, Flying Geese and Shoofly, have their origins in the Underground Railroad, as Hill later learned. She only discovered this while researching her senior thesis at Tougaloo College, titled "The Quilts of Life."

Inspired, Hill began a project with the help of her best friend and classmate, Gregory Jones, a curator at Smith Robertson Museum in downtown Jackson. She created "Grandma's Hands: Celebrating the Underground Railroad Quilt Codes," which now hangs in that same museum through the month of February.

The exhibit is a salute to many things: quilting as a traditional folk art form; evidence of Hill's skill as a quilt-maker and young, modern artist; and a history lesson on the Underground Railroad. The exhibit also feels personal, with Hill's story ever present in the craft passed to her from her mother and grandmothers. In her manifesto, Hill asks that the viewer "reflect on his or her own quilt of life."

According to legend, the Quilt Code was a spoken poem that provided escaped slaves with hidden clues to aid their journeys toward freedom. Each line of the poem coincides with a quilt pattern. For example, the poem reads: "The monkey wrench / Turns the wagon wheel / Towards Canada on a bear's paw trail." For the show, Hill crafted her own take on the Monkey Wrench, Wagon Wheel and Bear's Claw patterns, among others. She uses old, found denim and mattress scraps in Money Wrench. Her favorite, Bear's Claw, is rich with velvety browns and blacks, which Hill chose to highlight the "warm feeling" of a bear claw. In the Quilt Code, the Bear Claw guided the freedom seeker toward food and shelter through mountain trails.

The pattern Log Cabin, which Hill made from Christmas fabrics she bought at the Salvation Army, signifies a place of refuge. "Christmas was a time to travel and visit family," she says, and therefore was ideal for escape. Concentric patches of brown leaves, dark winter reds and greens converge on a central red square, which represents the hearth of a safe home.

Hill says quilting is more than just a means for "honoring tradition." It also allows her to pay tribute to her family and her journey as an artist. In the exhibit, a life-sized photograph of Young in front of a quilt by Hawkins hangs on an old clothesline. The clothespins originally belonged to Hawkins. A photo of a young Hill with her grandmother hangs over an antique Singer sewing machine and a box of scrap fabric.

Hill explains that quilting is more than art; it's also "a reason for women to get together and gossip." She found companionship within the Tougaloo Community Center quilting circle. Her photographs of these women hang in the exhibit, indicating that quilting is still very much alive today. In these pieces, the women smile and laugh, and Hill has a story about each of them. Hill is bubbly and outgoing, a self-proclaimed "goofball," and obviously an asset to any quilting circle, and not just for her know-how on a sewing machine.

Twenty-eight years old and devoted to quilting, Hill represents the hope that this time-honored art will continue to flourish. Jones says that in creating the exhibit, he and Hill strove to make quilting contemporary. He describes the exhibit as a way of "walking back in history, but then history meets the present."

What makes it contemporary? Other than the bold, pastel typeface used on the placards, Bill Withers' song "Grandma's Hands" playing in the background, and Hill's innovative use of color and patterns, Jones says that Hill herself is the most modern element. She represents a new generation of African American artists, bringing a centuries-old art form into the present, while infusing it with her own artistic sensibilities, one patch at a time.