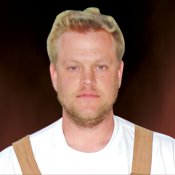 Brad Hooey manages the High Noon Cafe, which is in danger of closing its doors.

Brad Hooey is the manager of High Noon Café, Jackson's only strictly vegetarian and vegan restaurant operated by Rainbow Cooperative Grocery in Fondren. On Monday Aug. 24, Hooey led a community meeting on the restaurant's uncertain future. Hooey hoped that the meeting would stir up support from the cafe's loyal customers and elicit ideas for ways to keep High Noon afloat. By those standards, the meeting was successful.

"It was nice to see people out there," Hooey said. "More people showed up than I was expecting."

Hooey said that attendees bounced a number of ideas around.

"We're going to be trying some things in the next week or so," he said. "I think the biggest thing is just to get the word out that we're here. Vegetarian or not, people can trust that they're going to get some good healthy food that's delicious, too."

Hooey, 30, came to Jackson in the summer of 2006, and he has managed the cafe, as well as Rainbow's deli and bakery sections, since April 2007. A native Californian, he is a true believer in High Noon's mission to showcase the diversity and quality of vegetarian cooking, beyond the tofu-and-beans stereotype.

That mission is in danger, however, because of the sluggish economy. With a narrower profit margin, Rainbow cannot support the restaurantwhich has never been profitablemuch longer.

The restaurant does not skimp on quality, buying almost exclusively organic ingredients and preparing every dish from scratch, using nothing frozen. That commitment to quality and a "real product, from real people," is expensive, though, Hooey says.

"The store treats us a service to the community," Hooey told the Jackson Free Press. "The store has always floated us as a business."

Did not know it existed. I will visit tomorrow.

Talk about the power of community: I stopped by High Noon today to get my weekly "seaside cakes" fix. Brad told me today was the cafe's best day in about a year and a half. Almost everyone he asked said it was because they read about the cafe in the JFP. Now *that's* the power of local!

Yay! Long live High Noon! ;-) I've been there this week for lunch twice myself.

Yeah Ronni when I went for Seaside cakes last Friday it was packed!! I hope to go again this week too, it's just hard for me because my office is not close to that area.