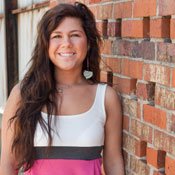 Lacey Norris, 25, started working in the field of cosmetology after she decided that college was not for her.

"It was my mom that encouraged me (to go into cosmetology) ... because I have such an artistic personality," Norris says.

After graduating from the Magnolia College of Cosmetology in 2002, the Canton native worked in several salons including Pam's Salon in Madison and Carrie's Salon. However, Norris decided that she needed her own space and direction.

In 2004, she opened Lacey's Salon at 1935 Lakeland Drive, in the middle of the Mississippi School of Therapeutic Massage and the Mississippi Board of Nursing. Norris, who will celebrate the five-year anniversary of her salon Sept. 4, claims that one of the best things about her job is bonding with her customers, who are mostly Millsaps and UMC students.

"I know most of all the Millsaps sorority girls," she says, laughing.

Norris plans to expand in the future, and already carries accessories and Bed Head hair care products. Lacey's Salon also offers make-up services and waxing. Norris, who was voted best hair stylist by Jackson Free Press readers in 2008 and 2009, says her artistic personality and personal attention to her clients sets her apart from her competitors.

And the $5 student discount doesn't hurt, either.