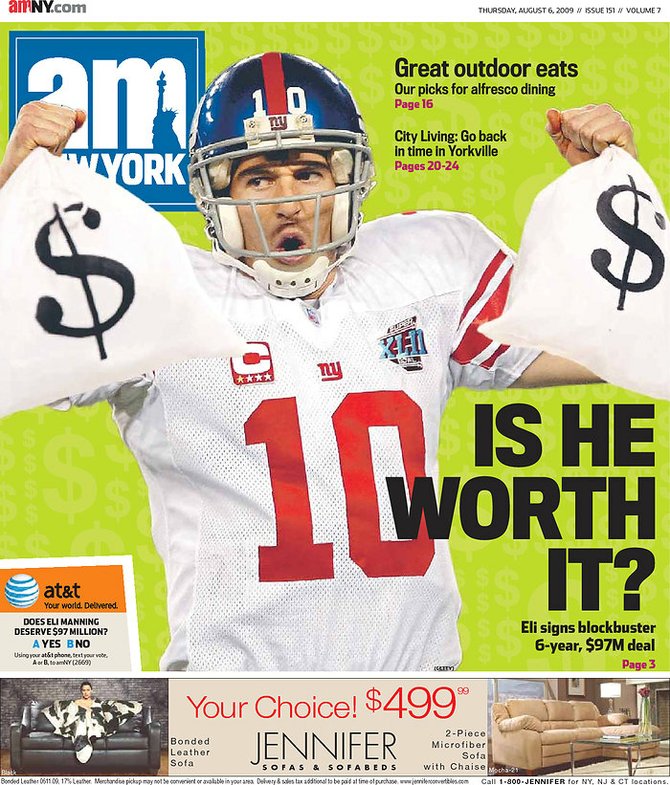 New York Giants quarterback Eli Manning has agreed to a seven-year, $106.9 million contract that will make him the highest-paid player in the league.

The Ole Miss alum and Super Bowl MVP will make an average of $15.27 million a year. That makes him the highest-paid Manning in the NFL, ahead of big brother Peyton, who gets $14 million a year from the Indianapolis Colts. The number that really counts in Eli's new deal is $35 million in guaranteed money in the new deal.

Eli Manning.......over-rated. Not worth that kind of money plan and simple.

I'm not an Eli fan, but I think he's done enough to warrant that kind of cash.

One good season. Does everyone forget that it was not too long ago that people were ready to get rid of Eli and Coughlin in New York. He was a Superbowl, so did Trent Dilfer, it does not make him worth $100 million dollars. To this point, Eli is a decent "bus driver", but he does not engineer drives that win games. It is just my personal opinion, but I see the Giants going downhill from this point on. Flag this message and we will revisit it at the end of the season.

Golden Eagle I don't know how anyone can hate the Pittsburg Steelers, a working man's team of players who let their play and rings do the talking. Unlike some other team which wears white and blue. You know what they say - not everyone is deserving of wearing the color white. Hate all y'all want to as we bring home the bacon again next year. That lady trying to shake down Roughburger on the false rape charge should have dated a cowboy if she was looking for money and not the mere pleasure of sleeping with a winner.

I will take Eli playing like he did in 2007. They finished 14-6 with a Super Bowl win. Who cares what qb rating say as long as they win?

Bubba 2007 was pure luck. Archie and Eli went to Ole Miss, one of the sorriest schools in the nation. You don't leave there and become a perennial winner. Archie is the prototype Ole Miss quarterback. The crying, blaming and poorly performing type. I had a fraternity brother named Wes Chandler who played with Archie with the Saints. He told me all about Archie.

Golden Eagle I don't know how anyone can hate the Pittsburg Steelers, a working man's team of players who let their play and rings do the talking. Unlike some other team which wears white and blue. You know what they say - not everyone is deserving of wearing the color white. It's easy: I'm a fan of the team that wears white and blue.

Walt- I know very well that they went Ole Miss watched both of them play there, even watched Archie in a few games when he was in high school at Drew. You are very wrong about Ole Miss being one of the worst schools in the nation, that honor would have to either belong to Miss State or Jackson State. :)

Baquan- LOL I knew I could get somebody fired up. I didn't say noting bad about Walter Payton, the best running back in the history of the NFL in my opinion, but he would still have been that good, no matter where he went to college. Archie didn't win to much at the Saints, but him and couple of other good players and the rest a bunch of sand lot rejects, how were they gonna win anyway? I'm a Fighting Okra , I'm gonna be nice and not rub that one in...LOL

The Fightin' Okra is still one of the best nicknames in college sports.

I thought the thread was about to go somewhere that I thought was quite interesting, but the direction changed. In 1988-89, I was an Academic All-State football player, I played on a team that eventually had 3 or 4 professional players on it. The smaller schools like Alcorn, J-State, etc., can not compete for those athletes when it comes time to recruit. Without question, the bigger schools are breaking the rules to get a lot of the higher caliber players. These kids go to these schools and make them millions of dollars, but very few people make the connection. Some of the greatest college and NFL players played for the SWAC,but conferences like SEC can lure players there with the intent of never playing them at their position. I wish there was a way to ensure that the playing field was level.

Individual talent wise, especially the greats, I would put these schools up against anyone, but the big conferences and schools syphon off so much talent that the HBCUs have a problem making a complete team. USM putting J-State on the schedule was a cool gesture. I would have loved to have seen one of the Big Three play against Air McNair. That would have been very interesting. To switch sports, I was a little kid in '78 or '79 when Alcorn beat MSU in B-ball.