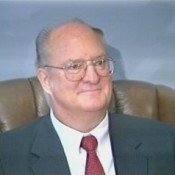 Mississippians owe much of the freedoms that we now enjoy, not to a governor or a legislative body, but to a legendary FBI agent named Jim Ingram. Sadly, he passed away Sunday after a long illness.

Ingram was in charge of the FBI's civil rights' desk in Jackson during the turbulent 1960s. Under his leadership, authorities brought the killers of Michael Schwerner, James Chaney and Andrew Goodman to trial and broke the back of the Ku Klux Klan in Mississippi. His accomplishments as a FBI agent and Public Safety Commissioner during the Kirk Fordice administration are too numerous to mention in this space. Suffice it to say that Mississippi owes more to this great man than it could ever repay.

I first met Jim a year and a half ago, while I was researching "Devil's Sanctuary." He proved to be an invaluable source for several chapters in the book. In the course of my writing that book with my co-author, Alex Alston, Jim and I became fast friends. For the past year or so, he and I have worked on his memoir. His place in American history is assured, from his role in the investigations of the John Kennedy and Martin Luther King assassinations, to the many hate crime cases that he helped solve in Mississippi.

After the worst of the civil rights hate crimes investigations in Mississippi, the FBI reassigned Jim to New York, where he headed up that office, and then to Chicago, where he was made agent in charge of that office. Later, he was named a deputy director of the FBI. When time came to retire there was no question that he and his family would return to Mississippi. Although he was born in Oklahoma, he frequently called himself a "Mississippi boy."

My last conversation with Jim occurred a couple of weeks ago as he lay in a hospice. I spoke to one of his three sons, who relayed my messages to Jim and his messages back to me. He was too weak to speak on the telephone, but not too weak to give final instructions about his memoir. He was a fighter to the very end.

Jim Ingram was one of the most influential FBI agents who ever lived. He also was a gentleman, a caring husband and father, an eternally inquisitive investigator, and a great friend to anyone lucky enough to spend time with him. My heart aches for his wonderful family, for I know what a void his passing will leave in their lives.

Mr. Ingram was Commissioner for Public SAFETY, not Public SERVICE.