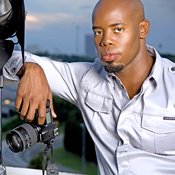 Derek Blanks is a Jackson-born photographer and illustrator based in Atlanta. He has been wildly successful with his commercial photography of world-class models and celebrities, including Jennifer Hudson, Angela Bassett, Bree, Amerie, Tasha Smith, Ludacris, Usher, Lil' Wayne and many others. He's currently working on an art project called "The Alter Ego," a fascinating series of photographs of celebrities and models displaying their multiple personalities. Blanks manipulates the images so that one person can be several different sides of themselves in the same image. You can see part of this series at http://www.dblanks.com.

Tell me about growing up in Mississippi.
I really enjoyed my childhood. Basically my father was a teacher in Pearl. We commuted from Pearl to Jackson and then from there, in third grade he moved to Jackson Public Schools, and we went to school in Jackson. I (went) to the academic and performing arts school, APAC. … I studied printmaking, photography, painting and all that. … I graduated from Murrah (High School) and moved to Baltimore, Maryland. But as far as growing up in Jackson, I think it was really cool because I was introduced to art and … to things like printmaking, things I wouldn't normally have in my environment.

Do you think your time in Mississippi has influenced your work?
I think it had a strong influence because my mom and my dad both are from rural areas of Mississippi. So I always kind of apply that southern tradition (to) my concepts. I take that (classic) country feel … of that rural area, back roads and small homes. … Stuff like that I think that majorly influenced (me). … I've been working on the alter ego project ... Also the South is known for rich food. I always incorporate richness from the South into my photography and my painting—how close knit people are in the South with families and friends. … I did my first children's book (about) the South. It's called "Up the Learning Tree" about a slave boy who climbs a sycamore and watches the European kids being taught how to read. I didn't write the book, but I illustrated it. And it's funny because I'm from the South (and) I had that experience to work on that book. So that was pretty cool as well. I think it had a strong influence on how I react and my beliefs and my work.

How did you establish your photography career?
I think I established myself in Atlanta as a photographer because I was really doing something that no other photographers were doing as far as using my illustration background to enhance and to tell a story with the lighting and the contrast.

Obviously, you work with really famous people now. Who were your first clients?
I started working with local hair magazines that were in town. We used to shoot like 50 models a day. And then I picked up Sho Nuff records. … From there I picked up more clients and more clients.

What has been your most memorable or unique experience or client?
My most unique experience was working with Jennifer Hudson. It was kind of surreal because she had already won her Academy Award. It was really cool because she was very nice, and she moved well in front of the camera, and she was just like an everyday person. And from there we did her alter ego, too. She shot that after her CD had been shot, and she wasn't pleased with the images. She wanted new images, and the label wasn't budging, and they actually said no to her, and we leaked (my) images. They were all over the Internet the next day. Everyone was saying how great she looked, and they should have been her cover, and they ended up using them for the back cover. … I just found out I'm going to get a cover in June with Essence Magazine from the last shoot we just did. I'm just really excited.

How long have you been in this business?
Roughly four to five years. Yeah, it's really been rapid. I just think it's good to see that anything is possible. Anything can happen. I never knew I'd be working with the people I'm working with, and it just goes to show that with dedication and determination you can do anything.