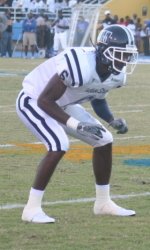 JSU cornerback Domonique Johnson was a second-team AP All-American in 2008.

College football: Jackson State cornerback Domonique Johnson has caught the attention of NFL scouts. Tigers coach Rick Comegy says of Johnson: "Once he learned to open up the door, he was able to see that the people here at Jackson State were genuine and realize that they didn't just like Domonique for his football, but wanted to know Domonique for who he was as a person."

College football: Southern Miss to play another road scrimmage. The Golden Eagles will knock head in Ocean Springs tonight. Eagles coach Larry Fedora is smart to take his team around the state.

Brown bomber: Brett Favre is the subject of a disgusting entry on Deadspin. But Doctor S is still laughing.