Spirit of a City 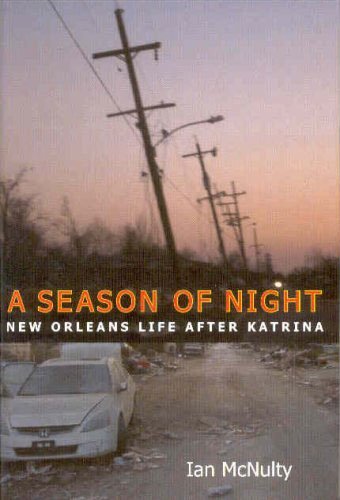 "A Season of the Night: New Orleans Life After Katrina" (University Press of Mississippi, 2008, $25) is the effervescent tribute of a New Orleans transplant to his adopted home. Ian McNulty sensitively writes a heart-felt, though at times overly sentimental, description of his life in New Orleans during the six months following Hurricane Katrina. At its best, the piece is a window into life in the city after media stopped covering the storm and before the city's visible resurgence. McNulty explores how the inhabitants of the "City That Care Forgot" managed to retain and recreate their city's particular, playfully lawless flavor in the midst of a frighteningly real and dangerous situation.

New Orleans' "laissez les bon temps roulee" attitude drew McNulty to the city from his Rhode Island home, and his will to preserve this costumed frenzy of a lifestyle was a major factor in his decision to return and rebuild. He lovingly describes his pre-Katrina mid-city neighborhood as replete with daily muggings and impromptu parades, and the city as full of lawyers sneaking out of the office for mid-afternoon oyster po-boys. He recounts purchasing his home from the elderly Mrs. Minette. After spending every last penny to buy her dilapidated fixer-upper through a handwritten bill of sale, McNulty receives a call from Mrs. Minette warning him not to rent to women, since the last time she did, her tenants operated a brothel from the building.

McNulty beautifully portrays New Orleans' playful, charming, if dangerous character especially well by contrasting it with Baton Rouge, where he evacuated. In Baton Rouge, McNulty finds himself in dull, generic places, such as writing at "a huge, high-backed booth at a chain restaurant in a strip mall" before returning to his room at the Quality Inn.

After deciding to move back to his deserted neighborhood, McNulty prepares to live with a wholly different kind of lawlessness. He reasons: "I would be living in a wood and plaster shell with a friendly dog and nothing but goodwill and fear keeping anyone at all from coming in through a broken window. It seemed like the right situation for a gun." Armed with a .45 and his canine companion, the Amazing Dr. Watson, McNulty lives on the top floor of his flood-wrecked house with no electricity or hot water to show the world and his neighbors that the block and the spirit of New Orleans would be back.

The small restoration achievements McNulty observes on his daily walks through the city poignantly illustrate New Orleanians' struggle to regain control of their lives. Being chased by a pack of half-feral dogs, throwing a party in a an electricity-less, deserted, half-gutted house, and trekking across the city to celebrate the return of his old-favorite bars all exemplify the trials and tribulations of recreating The City that Care Forgot in circumstances where stressful details of personal safety, insurance and curfew could easily overwhelm even the most dedicated carnivaler.

The remainder of the book follows the slow redevelopment of mid-city: At Halloween, the neighborhood was deserted; by Christmas, a few neighbors and bars had returned; and by Mardi Gras, basic amenities and spirit of the city was returning.

The book is meant to crescendo at the chapter on Mardi Gras, which McNulty builds up as a massive symbol of rebirth. Instead, this is where the book peters out. There are a few poignant, sensory descriptions of the Fat Tuesday festivities, such as an empty float passing down the route of the Muses parade in honor of the thousands lost in Katrina. By and large, however, McNulty waxes pedantically poetic about the "A living, sweaty, friendly, buzzed dissertation on the reasons why people still want to live (in New Orleans.)" The author is so eager to share the spirit of the moment that he loses the reader in these heavy-hand moody descriptions.

In all, McNulty's work has some memorable moments that illuminate the spirit of New Orleans and the dedication of those who worked to rebuilt it. It also raises some important questions about the quality of home. What is normal? And how can this city regain its balance of functional lawlessness?

"A Season of Night" will not go down in the annals of great memoirs, but considering the three years since Hurricane Katrina, it certainly clarifies how far the city has come, and provides an opportunity to celebrate the many efforts of its inhabitants to rebuild their unique, beloved home from the rubble.

Ian McNulty will sign copies of "A Season of Night: New Orleans Life After Katrina" Thursday, September 4, at Lemuria at 5 p.m. For more information, call 601-366-7619.