ON THE PRESIDENTIAL ELECTION ISSUES 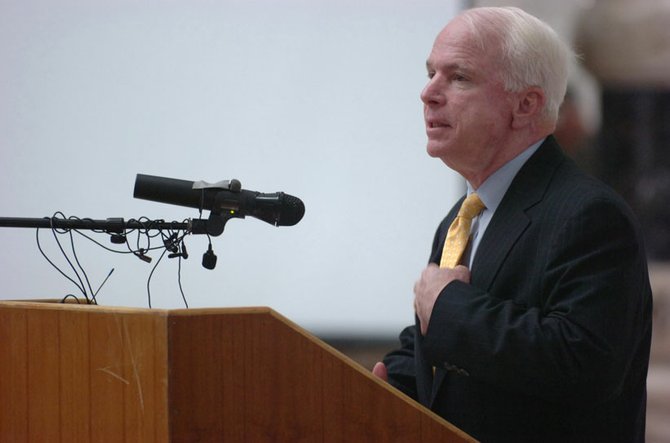 For information on how to protect your vote, please visit Jackpedia.com.

McCain/Palin:
• Skipped the vote for the Lilly Ledbetter Fair Pay Restoration Act, saying he would have voted against it.
• Opposes the Paycheck Fairness Act.

McCain/Palin:
• Voted against funding for the Individuals with Disabilities Education Act.
• McCain co-sponsored the Combating Autism Act of 2006, while supporting freezing funds to pay for it.
• Palin, the mother of a Down syndrome infant, is an advocate for special-needs children. Ridiculed fruit-fly research although it is used to seek a cure for autism.

McCain/Palin:
• Voted in favor of FY '07 and '08 budget increases.
• Absent from the Senate for all three votes on the '08 Fair Education Bill.

Obama/Biden:
• Will require lending institutions taking advantage of the bailout to put a 90-day moratorium on foreclosures for many homeowners.
• Allow federal government to lend money to state governments facing shortfalls due to high job loss and revenue decreases.
• Supports increasing minimum wage to $9.50 by 2011.

McCain/Palin:
• Will authorize the federal government to buy bad mortgages at face value.
• Will convert failing mortgages to FHA-insured loans.

Obama/Biden:
• Supports charter schools and merit pay for teachers.
• Wants to improve teacher training.
• Challenged No Child Left Behind as underfunded and too focused on testing.
• Supports "Zero to Five" plan, which focuses on early care and education for infants.
• Proposes pre-funding for federal grants for college education and increases in Head Start.

McCain/Palin:
• Allows you to keep existing health insurance, but will tax health insurance for the first time.
• Wants to reduce Medicare drug costs by allowing greater use of generics.
• Will fund $7 billion high-risk pool paid for through new taxes on employer-based insurance plans.
• Will not require coverage of pre-existing conditions.

Obama/Biden:
• Allow penalty-free early withdrawals of up to $10,000 from IRAs and 401(k) retirement accounts.
• Temporarily eliminate taxes on unemployment benefits and federal requirement that seniors withdraw from their retirement accounts after the age of 70.
• Retain Bush tax cuts for all except those making over $200,000 or $250,000 for couples and businesses.

McCain/Palin:
• Emphasizes drilling as a cure-all for the nation's energy needs (which won't come online for a decade.
• Will also heavily invest in nuclear and coal plants, with some attention to solar and wind energy.
• Will lower corporate taxes, which will favorably affect the oil industry.
• Will eliminate the tariff on imported ethanol.