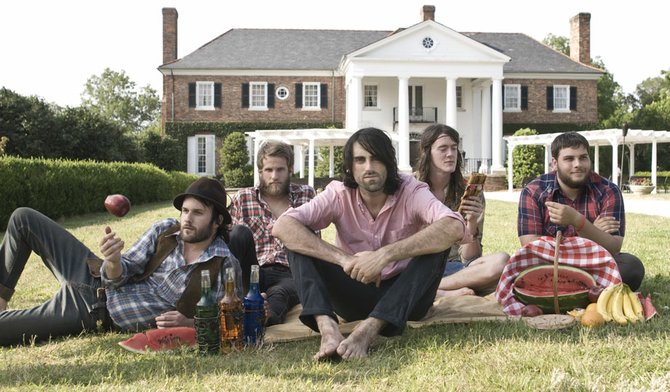 Clinton-based pop-punk band Jonezetta gets back to its roots on its sophomore project, "Cruel to Be Young." Photo by Courtesy Big Picture Media

Playing 220 shows over the course of a year is something lots of bands do. Touring in New Zealand is what some bands do. But signing on with the largest deal a label has ever offered to a new artist is rare. Clinton-based Jonezetta has taken all these steps in just over the course of the last two years.

Now on the road promoting their second album, "Cruel to Be Young," the band members will be the first to tell you that they have come a long way stylistically since their 2006 debut album, "Popularity."

Jonezetta formed in Clinton in fall 2002 when lead vocalist Robert Chisolm, guitarist Kyle Howe, bass player Ty Garvey and then-drummer Mick Parsons started playing together casually when they were still in high school. They played for fun until they started gaining interest from record labels in 2005. The band chose to sign with Tooth & Nail Records, inking the largest deal for a new artist in the history of the 15-year-old indie label.

With the intense pressures of a big signing, the October 2006 poppy dance album "Popularity" stressed immediate success, garnering radio play for singles such as "Get Ready (Hot Machete)."

"Basically each song was a stab at a hit," says current drummer and former manager Alex Warren, 22. Although the band signed with an indie label, band members felt they were pigeonholed to the pop-punk scene.

"Basically, at the end of the day, we called the record 'Popularity.' It speaks for itself," 24-year-old Chisolm says.

That wasn't the only pressure the band faced when recording their first album. Their former keyboardist, Tim Jordan, who had left the band to play with The All-American Rejects, committed suicide a week before the "Popularity" recording sessions.

"Imagine recording a dancy, upbeat record after something like that," Chisolm says. He later wrote the track "The Queen City Song," which appears on "Cruel to Be Young," about Jordan.

"Lost inside the day that never happened  In the back of your mind I'll find you," Chisolm sings at the song's end as the instruments drop out, leaving only his voice echoing on.

After promoting "Popularity" on the road with other Tooth & Nail artists, the band joined Warped Tour, playing a total of 220 shows in 2007. They brought in Warren, who would replace Parsons on the drums, and keyboardist Tyler Kemp. The heavy touring went on long enough for the band members to realize Jonezetta's sound needed to be warped, too. The mainstream pop-punk genre, with its staple sound of computerized electronic guitar distortion in a can, just didn't fit the garage punk of the band's beginnings.

"We did Warped Tour last summer and hated every minute of it. It wasn't our bag. We tried to make a record that was a good bit different sonically and hopefully will attract a new audience, while leaving old fans satisfied."

The band started initial work on "Cruel to Be Young" in late 2007. After playing a music festival in New Zealand in January 2008, band members traveled straight to Seattle, where they hooked up with producer Aaron Sprinkle to record the album. The band stayed in Seattle for two and a half months before wrapping up recordings in March.

Though the album at times reverts to the pop-punk tones of "Popularity," you're kept on your toes with the unsteadiness of Chisolm's voice in tracks like "Busy Body." The piano-driven "Holding on to You" has received strong rotation on XM Satellite Radio, Chisolm says. It's one of those songs you can imagine playing in the background of a driving scene in a film like "Garden State." Even singer/songwriter David Bazan of indie outfit Pedro the Lion makes an appearance on the album, lending vocals to "Sick in the Teeth."

"After being on the road for two years, and being a little naïve to the industry, it's kind of just what came out of that," Chisolm adds.

Chisolm's voice is as unsteady as the vocals of R.E.M.'s Michael Stipe throughout the album. Like R.E.M.'s post-punk sounds, Jonezetta fuses the pure '60s melodies of the Beatles with echoing minors.

"Popularity" was high-energy dance music full of synthesized arpeggios. Now the band has made another smirking commentary on being young, only with a more organic, stripped-back sound focusing primarily on the guitar, drums and piano.

"This album's more of an honest attempt of things I'm into doing lyrically," Chisolm says. "Yeah, sometimes you think about things, laying in bed, that don't always make a lot of sense  but can definitely make for a good song."

Jonezetta did a great job on this album. When I heard "Paint & Picture", I flashed back, way, way back. Back to listening to the Beatles on a transistor radio. I felt the love. When I listened to the entire album, I still felt the love. Chelsea, thanks for a good read!