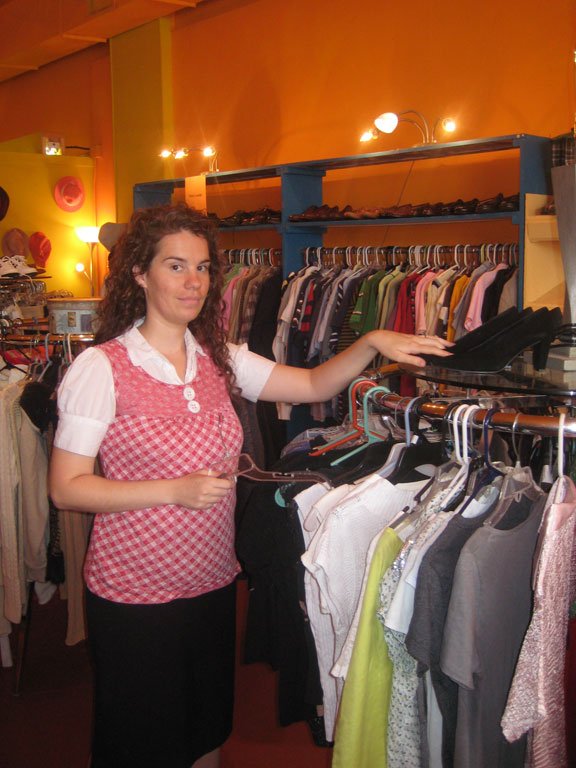 Kristin Tubb was fed up with retail prices and her job as an optician when she got the idea to open a consignment store in 2005. Since then, she has seen her idea become one of Fondren's hippest shops. The Orange Peel, a vintage consignment store located in Fondren, has everything from men's and women's clothing to LP records and jewelry. The Chicago native welcomes anyone looking for a vintage selection at affordable prices.

What made you want to open a consignment store?
I was an optician for about seven years, and I just got tired of it. I would go to the mall, buy two things, and it would be like 200 bucks. I would walk out with this little bag and feel so ripped off. My friends and I used to have swaps with our clothes, so we would go over to each other's house and would say, "I don't want this," so we would swap clothes with each other. I was finally like, "I could do this for a living." So I just got a bunch of people that I knew and put it in the paper. I bought clothes at first so I could open up the store, and now we make appointments for people wanting to consign their clothes in our store, and we are booked two months in advance.

How would someone go about selling his or her clothes here?
You would make an appointment and bring your stuff in. There is no limit to how much you bring in as long as they are clean and folded. We take the best stuff that we know would sell, and we write out checks once a monththe 15th and 21stand it's 50/50 percent. Most people like to keep their money as credit in the store, and then they come in and ask how much money they have. They can use it anytime. They will end up coming and finding a cute shirt or something, and they don't have to pay for it. They just swap out their clothes.

What made you want to bring your store to Fondren, and how have you seen Fondren change?
I knew people would get it here. I knew they would understand vintage and consignment. I didn't want to be in a stuffy environment and something that was just so structured. Fondren has changed for the better; it has become a little bit more lively. I feel like I have brought in a lot of people from Madison, Rankin and other places.

What excited you the most about coming into work?
When the consigners coming in and bringing their stuff, it is like going through someone's closet every day. We get to know them. I like my regulars coming in, and meeting new consigners. I like it when new people come in and saying it's their first time and getting excited about it.

Where do you see your store in the future?
Well, hopefully expanding and maybe doing some more furniture. I would like to get a Web site so I can e-mail people things and be a little bit more broad. I'd like a bigger place, but I want to stay in Fondren.

I love Orange Peel! I recently wore a sparkly black dress I got there for $5 to the Storyteller's Ball, and it was a huge hit. Cheers to Kristin for giving us such a great, hip shop in Jackson. In fact, that $5 dress is featured in this Bunny's Fashion Report video -- my own little ad for Orange Peel. ;-)

Y'all should think about doing something about the consignment store in Ridgeland -- Repeat Street -- much larger selection than Orange Peel.

Thanks! We'll put them on the list! Meantime, make sure they have a listing on Jackpedia, and post one if they don't. We get a lot of our story ideas from info posted there.

I've been to a number of consignment stores around the country and at first thought Orange Peel ranked up their with the best of them. That was until I saw the owner/manager of the store buying clothes in Goodwill on multiple occasions and then taking those same clothes and hiking the price up on them in her own store. That's not how consignment shops are supposed to work.

sophie - i hate to break it to you but the Orange Peel is top of the line because hard work is invested to gather together top of the line clothes from a variety of sources. The Orange Peel relies on clothes from closets, estate sales, "independent contractors" who scout out sweet vintage fashion and then bring it in for credit, and hunting on the owners part. You pay at the Orange peel so that you don't have to go and sort through all the crap at Goodwill.

I hate to break it to you Daniel, but Orange Peel is not top of the line by any means. I fail to see how buying a $3 sports coat at Goodwill and selling it for $40 benefits anyone except the owner of The Orange Peel. Do you think that these organizations (Goodwill, Salvation Army, Gateway Missions) still exist and continue to do great things for the community by overcharging for "used" clothing? I think what this woman is doing is a DISGRACE!!!!! I encourage everyone to go to GOODWILL instead, and spend some time browsing their very fairly priced, "used" clothing and at the same time contributing to a good cause and a good organization.

I hate to break it to you, Sophie, but vintage stores around the country buy from charity thriftstores and re-sell. I have no problem with that kind of free enterprise. The charity gets what they were charging for an item, and then the shop sells it for what it will bring. There is no "disgrace" here. Otherwise, I love Orange Peel, and find its prices some of the cheapest in the country for vintage (and I've shopped vintage coast-to-coast). I've never paid $40 for anything there, and in fact paid $5 for the dress I recently wore to the Storyteller's Ball. I also love that she has a variety of sizes. I also shop at NUTS, Salvation Army, Goodwills, etc. Most vintage-hunters do both. Long live Orange Peel.

i also do not discriminate. i'm not a big shopper by any stretch of the imagination, but i will usually check the Goodwill if i'm looking for a particular item. That said, i always check out the vinyl at Orange Peel because i know that they have collected some of the better items in town. Vintage stores deserve to charge a premium for the work that they put in to consolidate the finer items circulating in the resale world. And $40 is a bit of an overstatement. When you factor i the extreme difference in overhead that the Orange Peel must pay based on their location, employees and store atmosphere they maintain - i think we are looking at a pretty fair shake.