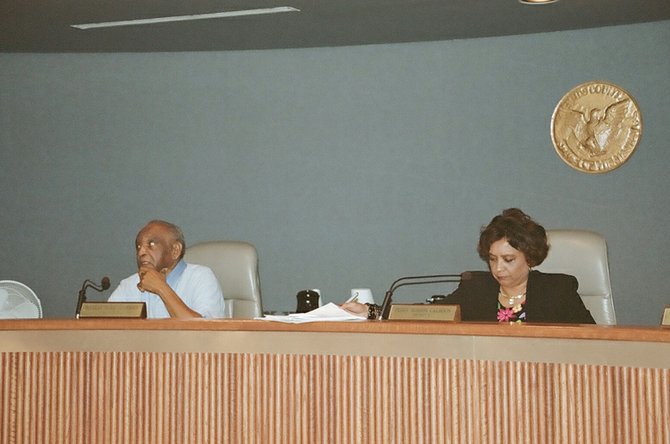 Hinds County Supervisors, including Doug Anderson (left) and Peggy Calhoun (right), are mulling how to deal with more than $10 million in budget increases requested by county department heads this week. Photo by Deborah Raji

The Hinds County Board of Supervisors heard department heads' budget requests June 13. What they got was a long list of numbers that the county likely will not be able to provide.

"The county essentially needs about $62 million," Board of Supervisors President Peggy Calhoun said. "We have not made any considerations to grant them their requests. We're just listening to them to hear what their needs are."

The county's current budget is about $52 million, but department directors say they need raises, and more personnel, tools and hardware to increase county government efficiency.

Hinds County Sheriff Malcolm McMillin personally asked supervisors June 11 for an extra $3.5 million, for a total budget of almost $21 million. McMillin said he needed the increase to pay for equipment related to the sheriff's department and the expensive county jail, penal farm and detention center, ranging from new patrol cars to better inmate food and care.

McMillin also said he was unable to fill all the positions in his skeletal work staff as long as supervisors kept sheriff's office salaries to a tri-state low. He also complained that ever-increasing fuel prices were straining his budget. McMillin was already groaning about fuel prices in 2006, when he demanded a $60,000 advance from board members for gasoline. That was back when a gallon of fuel hovered around $2.60.

Some board members, like newly elected District 1 Supervisor Robert Graham, are talking about a tax increase, but District 2 Supervisor Doug Anderson is not among them.

"There are a lot of things that need to be done, but I'm not voting for a tax increase, so, as far as I'm concerned, it won't get done," Anderson said, adding that the county could not afford McMillin's budget request. "There will have to be cuts, but right now the board is just going ahead as if they are going to have the money there. They're not looking at any cuts, and they're talking about raises. It's a amazing to me that they're planning on all of this whatever happens."

Calhoun sided with Graham on the tax increase, saying Wednesday that the increase was "absolutely necessary," according to The Clarion-Ledger, but District 4 Supervisor Phil Fisher joined Anderson in opposing it.

District 5 Supervisor George Smith did not take a position Wednesday, but Anderson said he'll have to if the tax increase or the budget requests are going to happen.

The county has until Sept. 15 to balance its budget, and Anderson already predicts a reduction in work force to make ends meet. Supervisors expect a county property appraisal to be completed by July 1, and Calhoun said she expects to hear about an increase in revenue thanks to business growth in the county.

"We have had some considerable new growth in the commercial area. ... I think it will be positive and I hope it will be enough to keep us from having to increase taxes," Calhoun said.

Anderson criticized the board for killing what he considered "revenue-generating" investments, such as the $13 million parking garage whose design the board of supervisors approved last April before later voting to scrap the project.

"We killed some revenue-generating measures and now we're spending all of this bond money on streets and things that are not going to generate one dime," said Anderson, whose former son-in-law's architectural firm, M3A Architects, designed the garage. "We had half of that parking garage already leased (to) the federal government. Then, too, we were hoping that the Mississippi Valley Power building would pay off. We had lease agreements for that building that would've helped to defray costs, but the new board just decided that they were going to sell the building."

While in session on June 16, the supervisors unanimously agreed to conduct a performance audit for most county departments. The study, first pushed by Fisher, will take about a year to conduct. District funds from two of Fisher's budgets will fund the effort, which will cost an estimated $35,000.

Fisher pointed out that the study would be "non-punitive," and would be used to eliminate extra computer programs and processes that were deemed excessive.

The supervisors hope this will make county departments more self and cost efficient.