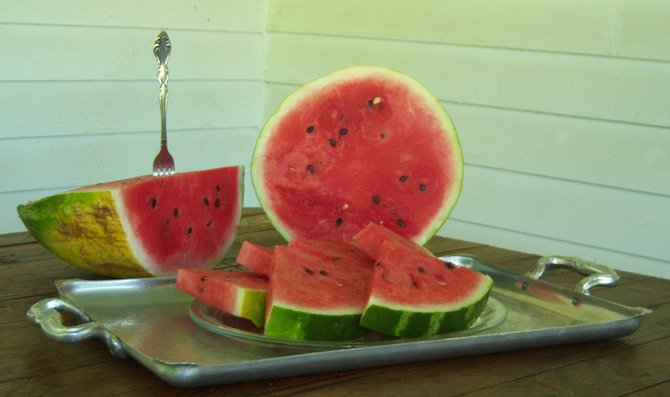 Watermelon has long been a southern staple, and Mississippians are aficionados. I recently took a poll among friends and coworkers to learn how best they liked to eat their watermelon. After all, it's the quintessential summer treat, which no picnic, family reunion or tailgate party would be complete without. In true southern style, each person told me his or her story without hesitation.

Whether it's ice cold on a metal table at her aunt's house or rubbed in his face at summer camp, each person's story gives way to a very particular method of eating (or not eating) watermelon.

With the rising temperatures and all this talk of watermelons, I became inspired to host my own watermelon party. One friend asked immediately upon invitation if we could have a seed-spitting contest. As if I had to think twice about that! Everyone gets their own marked cup to save their seeds, so that when the time comes, we'll see who can spit the farthest. There are no door prizes for the winner, but simple pride in knowing you out-spit everyone else is reward enough.

All the party research led me to hundreds of recipes with new spins on an old classic. One such spin is vodka watermelon. Take the watermelon and cut out a hole in the top. Pour vodka through the hole until it completely saturates the fruit, then refrigerate. Cut it open, slice it up and make sure you have designated drivers nearby afterward.

Other ideas include grilled watermelon, watermelon salsa, watermelon drizzled with honey-lime syrup, watermelon paired with goat cheese and balsamic dressingand what's sure to be my personal favorite: watermelon margaritas.

Experimenting with the luscious fruit is fun, but my favorite way to eat watermelon will always be outside at my parents' house. It always tastes the best there when it is room temperature and sliced long-ways. I begin eating from the sweetest part in the center and work my way closer (but not too close) to the rind. The juice runs everywhere. I slurp, lick my lips and spit the seeds off the side of the front porch.

It may not be too lady-like but it satisfies the Mississippi girl in me.

I made a vodka watermelon for the first time for a party a couple of weeks ago. First, I carved two holes in the top and used a funnel to pour in the vodka. I did this two days before the party and I guess the melon was too juicy or something, but it just did not want to soak up much of the vodka. The night of the party it still had not soaked up much vodka so I decided to try using a marinating syringe. I just injected the melon all over using the syringe, and that worked very well! After letting it soak for another hour or so, I cut it open and made melon balls using half of the rind as a bowl. To top it off, I poured a little more vodka (for good measure ;-) ) over the melon balls. The end result was delicious and refreshing, and you couldn't even taste the vodka (at which I was very surprised considering the amount that I used). Hmmm...watermelon margaritas...I might have to try that next. :-)