The Women of Ivy Gap 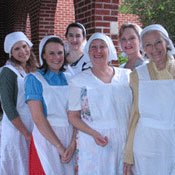 It all begins with the parting of dark purple velvet curtains, revealing the yellow-green walls of the fellowship hall of the First Baptist Church of Ivy Gap. Littered about the room are white crates painted with ubiquitous red crosses. The year is 1945, and the task is making bandages for the boys at war. One by one, the women of Ivy Gap get ready to work, and the audience gets ready to be charmed by six genuine, loveable Southern ladies.

Edith (Jo Ann Robinson), wife of First Baptist's pastor, is a pillar of strength for the group. In the opening scene, she comforts Luby (Francine Reynolds), whose son Norman is fighting in the war, reminding Luby that "no news is good news."

The sassy organist Mae Ellen (Jolyne Shirley) disperses zealous jives into her weekly hymnal review, even though Edith scolds her for doing so. The casual banter between the two ladies is the kind that only comes from a friendship seasoned in time and love, and Robinson and Shirley execute the relationship with beautiful honesty.

Sammy desperately attempts to gain Luby's approval, and the mystery surrounding Luby's hostility toward the girl is a thread woven throughout the play.

By Act II, it's 25 years later, and the women of Ivy Gap have flown, grown, planted and soured. They reunite, however, for the 100th anniversary of the church, a celebration that culminates in a well-performed climax.

As Edith "the Great Comforter," Robinson never misses an opportunity to hug someone's neck, and nearly every phrase from her mouth ignites a chuckle.

"I was raised Southern Baptist," Robinson says of her own experience. "I could hear people say these things."

In the role of Sammy, Wilkinson exudes a solid, mature talent. She delivers her lines with a timidity that is undeniably poignant; her presence on stage is always felt, even when her character is in the background.

The playfulness and colloquialisms of "Ivy Gap" easily appeal to a broad audience. It offers a humorous story about familiar people with helpings of sorrow and heartache for good measure. But the real treats of the play are the six actresses who add a refreshing depth to characters that so easily could have been played as flat stereotypes. The women bring out subtleties in their respective roles, ranging from Sammy's strength in dealing with a life continuously affected by war, to the tragedy of Mae Ellen's inability to leave Ivy Gap, to Edith's unique and progressive independence.

When asked why they think the play has sold out several performances, the cast is in agreement: recognition and community.

"The most important gift you can give to the audience," Dinkins says, "is the feeling of not being misunderstood. No one is left out (in this play). There are six different ways to feel understood."

"This play gives people permission to laugh at themselves," Evans says. "I think people are drawn to the community and the spirit."

Although "First Baptist of Ivy Gap" is set in Tennessee, its anecdotes and characters speak to people from all over the South.

"It's a Southern play without being insulting," Reynolds says. As artistic director at New Stage, she selected the play for production. "I like having a Southern play. It was a nice complement to the rest of the season, and it's a treat for our long-time subscribers. For everyone."

"It's a really great night of entertainment," Wilkinson says. "It has all the theater elements that people love."