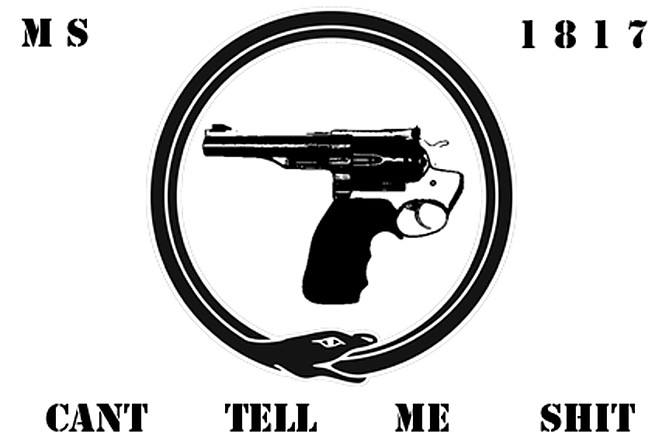 I wanted to submit a flag I designed for the state of Mississippi. Being frustrated with some state politician's and some voter's current opinions on same sex marriage and lawful discrimination, teen pregnancy and prevention, women's rights, a responsible approach to gun control, marijuana legalization for medicinal and economical purposes, tepid economic strategy, and (obviously) the inability for empathy towards our minority brothers and sisters in regards to: the state flag, Confederate battle flag, and mishandling of the public by the police. I designed a flag with sardonic wit that I'm most certain parallels the opinion throughout the country and beyond. I feel that the symbolism speaks pretty clearly, but I'm going include a detailing to avoid subjectivity. "MS" nuff said. We'll, it's on the left but that's not representative our politics; we're a conundrum like that. 1817 cause duh. The flag's graphic has the ouroboros symbol, often used as a symbol for cyclicality, and, but not always, self destruction encloses a gun that's barrel faces the shooter when held, and the phrase "CANT TELL ME SHIT" underneath the image. To sum it up, perpetual ignorance. We can do better. Thanks for hosting a new flag design. Kudos to all the designers. -Lexie Gay