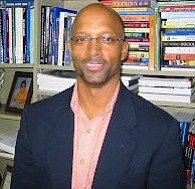 Patrick Webb is an associate professor of criminal justice at St. Augustine's University, a historically black college in Raleigh, N.C., who has done research on the relationship between media coverage and juvenile proceedings. Photo courtesy Patrick Webb