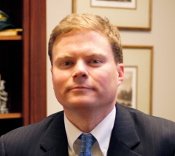 Brandon Jones says the Mississippi Democratic Trust, a new political action committee he helped start in 2011 and now heads as executive director, grew from "humble recognition" of his party's ...