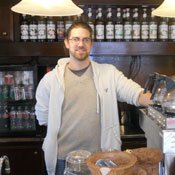 David Rahaim is the manager at Congress Street Coffee.

The Commons at Eudora Welty's Birthplace

David Rahaim's interest in southern literature led him to his position as manager of Congress Street Coffee at the Commons at Eudora Welty's Birthplace. In this role, he also oversees ...