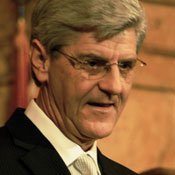 Gov. Bryant Chimes in on Immigration

After weeks of dancing around the issue, Gov. Phil Bryant announced his intention to resist expanding the state's Medicaid program under the federal Affordable Care Act.

On July 4, Gov. Phil Bryant named four of his agency directors to a task force on state recovery projects related to the 2010 Gulf of Mexico oil spill.

Bryant: Can't Do Nothin' For Ya, Man

Phil Bryant is grounded, and the Legislature's allowance is being reduced. This week, Bryant made his first executive budget recommendation to lawmakers at the Capitol. As expected, he took a ...