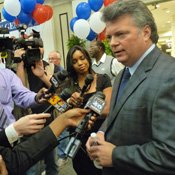 Attorney General Jim Hood won reelection to his third term by 60 percent of the state's votes last week. He may experience new challenges in next year's legislative session.