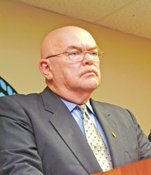 Two Hinds County candidates have confirmed that they will inspect ballots from the Aug. 2 primary.

Andrew McMillin, son of the Sheriff Malcolm McMillin, confirmed that the sheriff filed an inspection notice with election officials yesterday. He said any further comments would come from the sheriff.

A city auditor says she has discovered no employee theft of fuel so far, while the chief-sheriff blasts Council for publicly questioning fuel reporting.