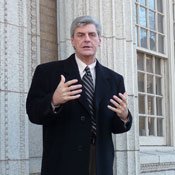 Lt. Gov. Phil Bryant is the Republican candidate for governor.

The battle over African American-majority legislative districts continues this week in the state capitol after a confusing series of dueling redistricting proposals failed to stick--two from the Mississippi House of ...