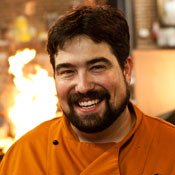 Nathan Glenn, chef and general manager of The Auditorium, said he will leave his position to focus on his other restaurant, Basil's in Fondren.

Local celebrity chef and entrepreneur Nathan Glenn told the Jackson Free Press last week that he will no longer be The Auditorium's general manager. Instead, chef Nate Ballard will take ...

Nathan Glenn is on Fire

Nathan Glenn, chef extraordinaire and the executive chef at The Auditorium in Fondren, has recently whipped up a new cooking show idea, "Nathan Glenn Cooks!