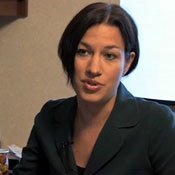 Brigitte Amiri (pictured), an attorney for the ACLU, and Don Thompson, executive director of the Department of Human Services, were featured in a documentary about the May abstinence-until-marriage summit that promoted religion on the taxpayer's dime.

In an effort to stop taxpayers from funding religious events, the American Civil Liberties Union filed a lawsuit in federal court last week against the Mississippi Department of Human Services ...