The Immorality of Incarceration

Mariachi guitarist Johnny Mora's bout with drugs was years in his past, but the legacy of jail time it led to is as much a companion as his guitar when ...

The competition at this year's Crossroads' Regional Music Video Showcase will be fierce. Throughout the past year, local filmmakers and musicians have spent hours filming, editing and producing videos aiming ...

It's the first question people have about acupuncture, and I'm no exception. But you gotta do what you gotta do for a story, right? So, putting my fear aside, I ... 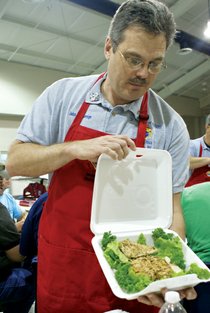 Table captain John Lacourrége displays a plate of barbecue chicken for judging at the Kansas ...

Mayoral candidate Regina Quinn visited the JFP office to discuss her ideas with our editorial board. Here is an excerpt from that interview in which she talks about the relationship between the Mayor's office and city developers. [6 min/Color/Stereo/16:9 aspect ratio]