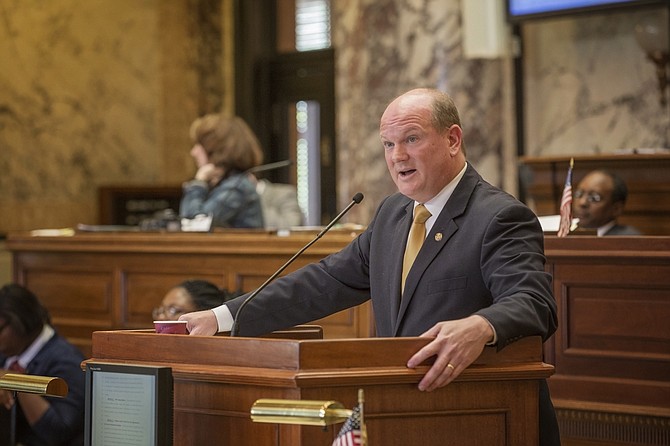 JACKSON — In the lead-up to this year's legislative session in Mississippi, supporters of a tougher gang law in the state talked a lot about the need to arrest white people. But in an ironic twist, the Jackson Free Press has learned that everyone arrested under the existing gang law from 2010 through 2017 were African American.

Over the last year, members of the Mississippi Association of Gang Investigators worked to spread the message that not all gang members in Mississippi are African American, Hispanic or another ethnicity. In fact, they warned, many of the state's toughest gang members are now white, between the growing Simon City Royals, white supremacist groups like the Aryan Brotherhood, and biker "clubs" such as the violent Bandidos, started by a white Marine in Texas in 1966 who would later be convicted of murder.

In August 2017, MAGI told The Clarion-Ledger that 53 percent of verified gang members, a number presumably pulled from the dozens of identified criminal groups in the state, are white. It is a potentially surprising statistic in the state with the highest proportion of African Americans in the nation and that experiences a large amount of media coverage of its black and Hispanic gangs.

The Mississippi State Gang Assessment, published in December 2017, listed the white Simon City Royals as the third largest criminal street gang in the state behind the Black Gangster Disciples and the Vice Lords, both black gangs. In addition, MAGI members regularly provide examples of heinous crimes by white gang members, such as the murder and dismemberment of a Royals snitch on the Coast in 2016. Welford Lee McCarty is now serving a life sentence for murder charges.

MAGI's recent message was clear: The state's gang investigators are not fixated on black gangs and do not want the expanded gang law in order to profile young people of color. When asked to comment on the 53-percent-white report, Pascagoula District Attorney Tony Lawrence told the Jackson Free Press via email: "I have not seen that statistic and cannot comment on it, but I can say, in remembering gang cases in my office, I have prosecuted more white gang members for crimes than of any other race."

Prosecuting someone for a specific crime who happens to be a gang member and prosecuting someone, or adding on additional sentences, for being a member of a gang are two completely different things, however.

It is not talked about a lot in the push for an expanded gang law, but Mississippi already has a gang law on the books. The Mississippi Streetgang Act, passed in 2001, targets "three (3) or more persons with an established hierarchy that, through its membership or through the agency of any member, engages in felonious criminal activity." That is, much like the FBI does with the federal Racketeering Influenced and Corrupt Organizations Act, called RICO, the State can go after a group that conspires together to commit a criminal act. That is different from making it illegal to be part of a gang and thus being held responsible for crimes other members might commit separately, as the failed gang law this session could have done.

But despite MAGI frequently warning that white gang members pose a strong threat in today's Mississippi, the arrests and prosecutions under the existing street-gang law have only targeted African Americans, State Public Defender Andre de Gruy pointed out to the Jackson Free Press after the expanded gang law failed this session.

The Administrative Office of the Courts confirmed that from fiscal-year 2010 through 2017, court disposition data show that 97 people were processed under current gang law. All of them were black.

Of those 97, 22 pled guilty, four were dismissed, one faced house arrest, 11 were no-billed (dismissed), one was non-adjudicated, 53 remanded/passed to the file* and five had probation revoked, the Administrative Office of the Courts confirmed.

"From 2010 to 14 it was seldom used—fewer than 30 dispositions," de Gruy explained in an email. "The last two years of data indicate 32 indictments disposed of per year. These came from 5 of 22 districts but primarily from Forrest and DeSoto counties."

The State's 2017 gang-threat assessment found that 413 Simon City Royals had been in custody in DeSoto County last year, but that does not mean they were prosecuted under existing gang law. The assessment also pointed out that a Forrest County gang member, part of the 74 Hoover Crip Gang, was arrested in 2015 for capital murder and other felonies for killing two police officers. The Forrest County Corner said he died later that year in jail from heart disease. (Note: The assessment was found during the 2018 legislative session to have dramatically over-counted the number of gang members in Mississippi prisons.)

De Gruy, who opposed the expanded law due to both costs and the potential to profile people of color, says more information is needed to fully vet who the current gang law is already targeting. He would like more information about the dispositions under the existing law, including who was under 18 at the time of charge.

He also suggested that gang laws could use a way to check them for racial profiling. "[A] provision could be crafted to review the racial impact annually," de Gruy said.

On the Senate floor, the sponsor of this session's expanded gang bill, Senate Bill 2868, deflected concerns that expanded gang laws are used to profile Mississippians of color. ""It's not a Republican, Democrat(ic), black or white (issue)," Sen. Brice Wiggins, R-Pascagoula, told black lawmakers during the debate.

* Author's note: The data provided by the Administrative Office of the Courts listed separate numbers for "remanded to the file" and "passed to the file," which I originally included separately above. Those mean the same thing, and I have edited the above story to reflect that and added links to explain the various dispositions. I also listed the race/ethnicity categories that the office uses to categorize after a question about it. Hispanics are not included in the "white" category.

Additional reporting by Arielle Dreher. Read more at jfp.ms/gangs and jfp.ms/preventingviolence. Email Donna Ladd at [email protected] and read her Guardian story on white gangs here. This story is copyright 2018 Donna Ladd/Jackson Free Press Inc., and its contents and quotes can only be used or "aggregated" with permission of the author.