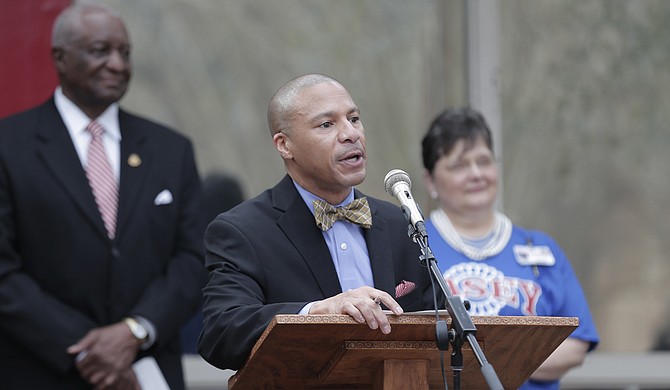 Dr. Cedrick Gray, superintendent of Jackson Public Schools, says that Forest Hill High School will see increased personnel patrolling the school after reports of consistent fighting at the school. That may not make the school safer, however. Photo by Imani Khayyam.

JACKSON — When the parents, students, faculty, and staff at Forest Hill met in the auditorium to discuss violence and fighting at the community chat the night of May 4, the room rang with frustration at the perceived chaos of the school environment and concerns about the safety of the students and teachers after a mom drew her gun during an afterschool fight on campus.

Fighting had been an issue at Forest Hill all school year. Students at the meeting said kids were fighting each other, and the school environment was generally disruptive and not conducive to learning. When a parent in the audience asked Dr. Cedrick Gray, superintendent of Jackson Public Schools, how the district would solve the problem, he promised a higher presence of district personnel and help from the Hinds County Sheriff's Department.

But research says more cops in schools do not solve the problem. In many cases, schools see even more disruptions in more punitive academic environments, with an increased number of students entering the school-to-prison pipeline. In many cases, the Southern Poverty Law Center reports in a Spring 2013 issue of "Teaching Tolerance," school resource officers often arrest kids at school for nonviolent offenses, such as being disruptive in the classroom.

The answer to JPS' issues, thus, might not be in harsher punishments and kicking kids out of school where they are more likely to come in contact with law enforcement. Instead, the district-wide PBIS, or positive behavior and instructional support model, has curbed behavioral issues at many JPS schools, and has even turned many of its elementary schools into model sites of positive behavior reinforcement. It can also keep young people from getting into worse trouble—like juvenile detention.

Dr. Margrit Wallace, executive director of student academics and behavioral support at Jackson Public Schools, says PBIS not only improves the social-emotional mindset of students, but also makes schools safer and more structured for everyone.

"It's not a canned discipline system. It's based on research, and it works," Wallace told the Jackson Free Press.

But despite PBIS' success at schools, scary events still sometimes occur. Sgt. Damon J. McDaniel of the Gulfport Police Department told the Jackson Free Press he couldn't remember the last time a student was violent at PBIS School North Gulfport 7th & 8th Grade School in the Harrison County School District—but that didn't stop a student from bringing a 22-caliber weapon, a mask, 100 rounds of ammunition and two magazines to school with him last month.

But, McDaniel said, all things considered, the school and the district handled the situation phenomenally.   After a student reported his classmate to principal Regina Lewis, she alerted the school resource officer. They swiftly and calmly dismissed the students from the classroom until the student with the gun remained. The officer disarmed and arrested him, sending him into the youth-court system. No one was harmed.

"It happened seamlessly, because we trust each other. We work together," Lewis said.

And though she attributes the seamlessness to the effectiveness of her team at North Gulfport and the district's crisis plan, the school's PBIS system helps build trust among students and adults at school, too.

"We identify those kids that are always doing well and making sure they're rewarded. Even those that have had issues and lose merits are spotlighted," Lewis said. "We're always looking at and encouraging positive behavior."

It's key to getting young people to speak up about dangers they see. "The main thing I stress to everybody is the reporting aspect. A lot of kids think, 'I don't want to be a snitch,'" she said. "Snitching at school is telling on somebody for chewing gum. But at school, it's reporting, especially if your lives are in jeopardy."

Regular public schools aren't alone in implementing the PBIS model; the behavior framework has seen success not only at schools, but also at youth detention centers.

The Rankin County Youth Detention Center in Pelahatchie serves as a model site for other juvenile-detention centers across the state.

There, the focus is on the wellbeing and care of the students who attend, and they even foster dogs for people to adopt, said Toni Kersh, bureau director of compulsory school attendance enforcement, alternative education and GED options at the Mississippi Department of Education.

JPS students have a detailed student code of conduct that outlines punishable behaviors by seriousness. And though it isn't "all-inclusive" for offenses, it contains an authorized guideline for disciplinary action against trivial behaviors such as not having a hallway pass to graver problems such as drug use or violence against another student or teacher. JPS has intervention plans at every infraction level, ranging from verbal warnings from teachers to suspensions. But the student code of conduct is arranged to curb the escalation of violence before having to resort to ejecting a child from school.

PBIS works most effectively, Wallace says, when the school implements strategies as early as possible to set the environment of the building. "When PBIS is implemented as it should be, you're not going to have what happened (at Forest Hill)," Wallace said, referring to the fighting before the gun entered the equation. "That would be a very discrepant event. When you have a situation that's challenging as that was, you've got to gain control and help others realize you're going to put a stop to this."

Whether in a school or detention center, Wallace says the PBIS model works best with the right leadership. Schools are supposed to turn in data every quarter in order to help analyze potential behavioral issues at their schools.

In addition, schools are expected to teach the framework at their schools; from walking down the hallways, to eating lunch, the adults at the school are supposed to set clear behavioral expectations.

"The major factor is leadership," Wallace said. "We can lead from the district and provide support, but the leader has to take hat initiative on, and they have to take that on. I'm really optimistic about Forest Hill. We're making very aggressive plans to help them out."

When PBIS works, it doesn't just improve the school environment; with positive behavior reinforcement, students typically feel better about themselves.

"Everyone knows what the expectations are. You are recognized. And I'm not talking about being rewarded necessarily. But we're building intrinsic recognition. You're helping to promote a positive environment in your school," Wallace said about the PBIS alternative.

Sierra Mannie is an education reporting fellow for the Jackson Free Press and The Hechinger Report. Email her at [email protected]. Read the "Preventing Violence" series at jfp.ms/preventingviolence.