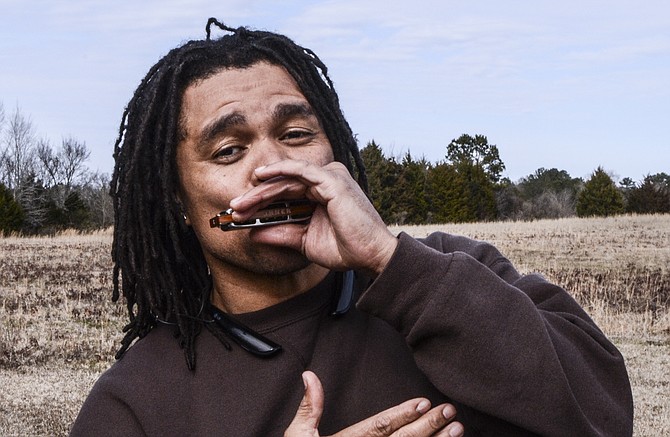 Canton, Miss., native Grady Champion brings young local musicians into his backing band to help them learn valuable music industry skills and to instill a love of the blues. Photo by Trip Burns.

Grady Champion tucked his ears and signature dreadlocks under a winter hat. It was February, and the roller coaster of cold and heat wasn't helping the acre of flatland around his home in Canton. He latched his Chevy van to the trailer, which had his face superimposed on the side, and shifted into drive. Bits of rock and dirt slung against the trailer, which stayed wedged in the muddy ground for a while before the front wheels caught traction on his gravel driveway.

It wasn't the most fun use of a Friday morning, but Champion, 45, would need that trailer.

Later, after his bandmates arrived, they hauled stacks of amplifiers and instruments into the back and made the hour-long drive to Vicksburg, where they unloaded it again, set up and did their sound-check. But the real hard work hadn't started, yet: the moment when Champion and his backing band jumped onstage and reminded an audience of 100-plus people, all raised on classics, that the blues has a future, too.

Champion built his personal recording suite, Backyard Studio, beside his house last June, using equipment that he purchased online from Sweetwater Sound in Fort Wayne, Ind. The building serves as headquarters for his new label, D Champ Records, which already features artists Eddie Cotton and Jj Thames on its roster. With the studio's matching olive-green exterior and glass screen door, you'd be forgiven for assuming it's simply an add-on bedroom or guesthouse, but the inside is another story entirely.

A series of soundproofed rooms, most not much bigger than walk-in closets, connect to the control center, which houses a large mixing board for recording. While Champion finished parking his vehicle, bassist Ken Smith set out chairs for the musicians in a room with an electronic drum kit and keyboards.

Smith joined Champion's band about four months ago, taking the spot of the blues singer's son, Marquis, 25, who lives in Memphis, Tenn., and stopped touring after he got engaged. Smith mentioned Ken Smith Guitars, a bass manufacturer in Perkasie, Pa., that he hopes will one day endorse him. 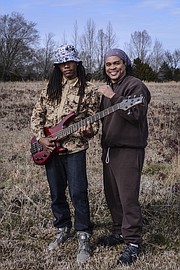 Grady Champion (right) and bassist Ken Smith (left) are in the early stages of recording an album using Smith’s skill for melodic and chord-based bass playing.

Because Smith is only 21, "never" might not sound that long, but he has been playing bass guitar in the Jackson area since he was 11 years old. Before he started playing with Champion, he rarely felt attached to a project.

"I was basically playing freelance bass with local artists and churches," Smith says. "I played for a guy, Ashford Sanders, who's in gospel, and I did a little traveling with him around the states. Other than that, it was basically small gigs and church gigs."

Guitarist Markus Shell, 19, told a similar story. Before joining the band two months ago, he held a day job at Kroger and was a hired gun on guitar at night. He played everything from gospel to R&B for local acts such as Kerry Thomas, Henry Rhodes, Stevie J and Keyone Starr, a close friend who recently sang on Mark Ronson's album, "Uptown Special."

Shell and Smith share a sort of instrumental origin story, with their parents' support as driving factors in their musical education. After Smith's brother picked up the drums, his mother jumped at the idea of the brothers learning music together. For Shell, his father provided a way for him to learn guitar.

"I'll never forget, I told my daddy one day, 'Dad, I want to play guitar.' Sure enough, that same exact day, he took me to a guitar shop," Shell says. "I had a lesson, and I got a guitar that day." After about six months of lessons, he decided to continue his education on his own. Similarly, Smith only took lessons for two weeks before taking the self-taught route.

As Champion's first cousin, it makes sense that drummer Calvin Jackson, 22, has stuck with the band the longest, having served three years in the rhythm section. He also has plenty of insight into how his cousin has developed over the years as an artist and a businessman.

"He's stronger. He don't take nothing," Jackson says. "He doesn't take no for an answer. That hasn't changed, and it isn't going to change."

When he isn't drumming for Champion, Jackson produces hip-hop music, some of which has recently gained exposure in the Mississippi rap scene.

Still, learning more about blues music has benefited him across the board. He takes inspiration from California rapper Zaytoven, who incorporates his experience as a church organist in his beats.

"Playing drums and then going back to work on my beat machine, it just makes it easier for me to throw a pattern or something on there. Then I go from that to playing drums at church, and that's a different feel than all those sounds put together," he says. "I can really create some music. When I create my rap songs, I don't have to make just a rap beat. I can add live guitar and live bass and make music."

In their stints with Champion, Shell, Jackson and Smith have enjoyed playing Champion's originals and earning their stripes with blues standards such as Howlin' Wolf's "Smokestack Lightning" and "Spoonful."

Ultimately, they all want to be known for their own work, but for now, the musicians absorb as much knowledge from their blues benefactor as they can.

"I ain't gonna lie," Smith says. "Ever since I've been playing Grady's music, in terms of blues, I understand how the music is supposed to be played or how it's supposed to be written—the progression and the phrasing."

"It's about taking the time to learn," Jackson says.

'Something About This Root'

Given Champion's name recognition, it's safe to say that he wasn't short on available musicians to fill out his backing trio. He chose to look within Mississippi, though, and not just because of state pride. Champion points to the class of musicians that represent Mississippi at the International Blues Challenge in Memphis, Tenn., each year, including 2015 winner and Champ Record's signee Eddie Cotton, 2014 winner Mr. Sipp, 2006 winner Eden Brent and Champion himself, who won in 2010.

"I always tell everybody we're the cream of the crop," he says of his fellow musicians. "... You have so many Mississippi artists that we haven't even heard of yet, that haven't even gotten out the house, and that's bad. It's something about this root. It breathes this kind of stuff."

While it's important to acknowledge the root, it's equally important not to trip over it. When Champion and his trio perform, they try to find the sweet spot for an audience: enough familiarity to draw them in and enough innovation to keep them. While that usually equates to about a 50-50 split between original music and cover songs, Champion won't abide the usual take on a traditional tune.

"That's all we do is new stuff. When these youngsters play 'Spoonful' or 'Smokestack Lightning,' people are going to feel it like Muddy Waters or Howlin' Wolf felt it, but it's going to be with a twist on it," he says of his bandmates. " ... That's what you want to do every time you touch the stage as an artist and as a musician; you want to leave your imprint. If people want to hear the same thing, ... they'll buy a Chess Records collection. But they don't want to hear that."

That fresh vision of the blues is one of the main reasons Champion chose band members half his age. There are certainly players with more notches in their musical belts, but those musicians grew up listening to the same artists he did. They jumped through the same hoops, and they don't have nearly as much use for his guidance.

"(I want to be) like a father figure and like a leader, to at least give them the knowledge not only to play their instruments but also to understand this business," Champion says. "See, when I was 18 years old, I wasn't playing music. I was working for record labels. I was promoting music. ... It's about keeping the blues in that younger generation, you know?"

Youth isn't always a plus, though. At a recent performance at Ameristar Casino in Vicksburg, the management barred the band from using Shell due to his age, which meant finding a last-minute replacement in guitarist Caleb Armstrong. While Champion paid to have Shell emancipated to avoid these situations, the Mississippi Gaming Commission prevents Ameristar from honoring it.

It wasn't the first time that age caused a problem for the group, either. While Smith says those troubles have been few and far between, he received similar grief at an Ameristar performance a few weeks ago.

"I was 21, walked in, didn't get IDed and set up all my equipment," Smith says. "We were already onstage playing, and two security guards and a manager walked up and ID'ed me. We had to stop the whole set."

Champion doesn't harbor any ill will about the casino's reaction to his youthful crew. He loves playing at the venue, but believes Ameristar's patrons are missing out. The band shines when they perform together, as Champion saw night after night during the band's recent two-week tour in Canada. The band was well received at every venue they played. Then again, where are they not?

"As long as you deliver it the way it needs to be delivered, you're going to get the response," Champion says. "If anybody tells you, 'Well, son, this area don't like the blues,' that means they weren't playing the blues."

"When you can make one person come see you every day of the week just off of seeing you one night, you're doing something right," Shell adds. "... That's what we'd get every time in Canada. They ain't never seen or heard a sound like we have."

The tour was a great lesson for the musicians, whose road experience is admittedly limited, but it also confirmed what Champion believed from the outset: His band is the next big thing. From their work ethic to their professionalism on the road, Jackson, Smith and Shell consistently proved themselves. Champion's hope is that, when the time comes, Mississippi can provide a blues scene that's healthy enough to support their music the way it did his.

Champion wants to see the blues flourish in Jackson, too, in areas like Farish Street, which he envisions as the next Beale Street, "where every two steps you got a club and music is going through the night. No curfew. Let them party until they can't party no more," he says. But that means a shift in culture: No more clinging to the classics like they make up the blues bible and pretending that music—and musical taste—hasn't changed.

"A lot of people for so many years have really blocked the growth and kept it in the same form. Even when you first put (everything) together to make wine, when they store it, it ages. And when it ages it gets better," Champion says. "That's how I look at music: We ain't gonna take the '50s blues and try to keep it the same in the 2000s. We're in a totally different century. "Let the boys play. That's all I have to say."

For more information on Grady Champion and his band, visit gradychampion.com.