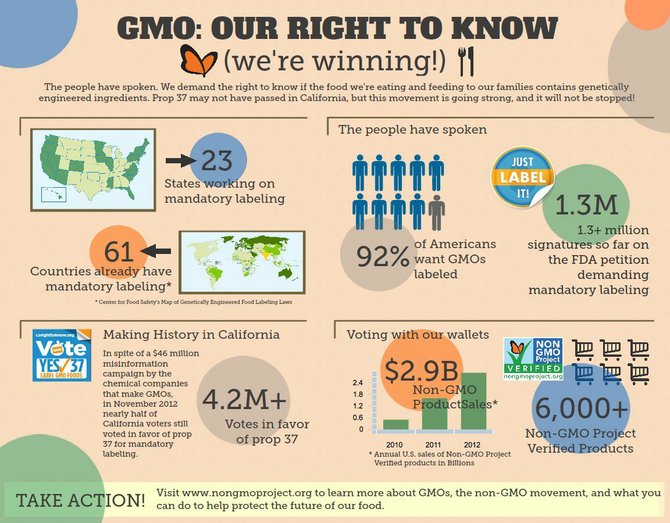 Although a GMO labeling bill was killed in California, the movement toward universal labeling continues, as seen in this graphic by nongmoproject.org. Photo by Screenshot via @unhealthytruth twitpic

The Big Ag and Big Food cartel may be chortling now that it “won” Nov. 6 by defeating California’s Proposition 37 that would have mandated labeling of food containing genetically modified organisms (GMO), but that victory may be short-lived.

Already, Connecticut, Vermont and Washington state are preparing 2013 initiatives, 23 states are working on legislation to require labeling, and Canada is considering legislation for a national ban on GMOs. Sixty-one countries already have mandatory labeling.

A massive disinformation campaign that snowed even otherwise reputable voices killed Prop 37. A consortium of food giants funneled more than $46 million into defeating it; Monsanto alone spent $8.1 million. By comparison, the anti-GMO side only had $9.2 million to spend, despite more than 3,000 food safety, environmental, and consumer organizations endorsing them.

So, how did it lose? The massive funding by Big Ag and Big Food raised so many questions about the proposed labeling law that those who were undecided or feared the scary, untrue claims that it would increase grocery prices voted “no.” Even so, 47 percent of California voters voted yes — some 3.5 million families!

That sends a powerful message: Despite fears about the specific legislation of Prop 37, a majority of Californians probably would vote for a mandatory GMO labeling law if the questions raised were honestly addressed. (National polls show up to 90 percent of Americans want GMO labeling, see: rodale.com/gmo-labeling)

Moreover, because the publicity raised consciousness about the issue, now, millions of Californians and those who followed the Prop 37 debate around the nation are looking at the food products they buy to determine if they contain GMOs simply because Prop 37 was on the ballot.

Bottom line? If food manufacturers want to stay in business, they will start labeling and switching over due to self-preservation. Regardless of specific labeling requirements, or how long state or national governments drag their feet, consumers will win this food labeling battle by voting with their wallets!