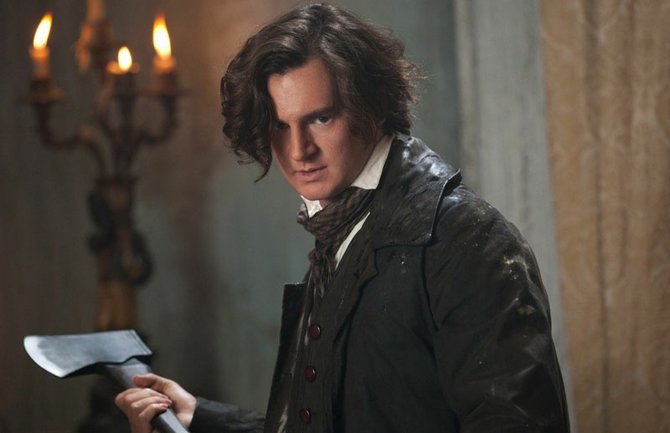 A new side of Honest Abe, played by Benjamin Walker, comes out in "Abraham Lincoln: Vampire Hunter."

A new side of Honest Abe, played by Benjamin Walker, comes out in "Abraham Lincoln: Vampire Hunter."

"Abraham Lincoln: Vampire Hunter," a rare cinematic original based on the book of the same name by Seth Grahame-Smith, exposes the eternal struggle between men and the living dead. Abraham Lincoln admitted as much in the October 15, 1858, debate against Stephen A. Douglas. "It is the eternal struggle between these two principles—right and wrong—throughout the world. They are the two principles that have stood face to face from the beginning of time; and will ever continue to struggle. The one is the common right of humanity (the living) and the other the other the divine right of kings (the bloodsuckers of society)."

Who better to stop the blood suckers than a silver-tongued politician named Abraham, destined to be a leader of nations based on his moniker alone?

For those few who may not be familiar with the ways of the living dead, silver kills vampires. Any type of silver accouterment can work, from silver tongues to bullets, knives, coins, axe tips, forks, tiny toy-soldier swords, chains and pocket watches.

In the film, Lincoln implements all types of silver from the sublime to the ridiculous. The vengeful Lincoln beheads a vampire with a silver-tipped axe which has a silver bayonet in a secret compartment and can cough out a few silver bullets in a pinch providing added assurance that the job is done right.

Sounds like overkill, doesn't it? But you can't take any chances when it comes to killing those eternally damned living-dead creatures.

The movie, directed by Russian filmmaker Timur Bekmambetov, opens in sumptuous sepia. The hazy glaze of the scenery reels us back in time to when Abe was a boy and his best friend was a young African American. Little Abe's outspokenness leads to his dad having words with the boss, Jack Barts (Marton Csokas). Barts threatens to collect on debt owed by the Lincoln family. Under stealth of night, Bart sneaks into the Lincoln cabin and sucks the life out of Abe's mama. Poor little Abe eyes the whole thing from a crack in the attic floor. Bart gives him the stink-eye in return.

If you learn one thing from "Vampire Hunter," it's this: Don't go fooling with vampires unless they suck the life out of your mama. Then and only then do you have the requisite rage to chop off their heads.

Vampires have frightful tempers. Even the slightest whiff of a threat provokes pools of drool from their long-fanged mouths and the emission of killer pheromones that ultimately leads to brawling and bloodshed. When they lost their souls, vampires lost their sense of humor as well. Young Abe avows himself to the depletion of the American vampire population. As a young man, Abe (Benjamin Walker) learns from his mistakes, and he is saved his folly from vampire hunter Henry Sturges (Dominic Cooper).

The actors in this film fully commit to the absurdity of the plot. Many critics fail to recognize the Herculean accomplishment of Benjamin Walker, a Julliard grad who played young Kinsey in "Kinsey" and Harlon Block in "Flags of Our Fathers." Walker can recite the lines of Gettysburg address in a profoundly moving way and then wield his killer axe like Liam Neeson in "Gangs of New York." Walker, who resembles Neeson at the start of his career, communicates the right amount of gravitas to portray Lincoln. He joins the ranks of Daniel Day-Lewis, who portrays the 16th president in Steven Spielberg's upcoming film "Lincoln," Stephen Lang in the mini-series "To Appomattox," and Will Ferrell in Jeremy Konner's "Drunk History: Douglass & Lincoln."

The sinister Adam (Rufus Sewell) heads the clan of vampires, who populated the South first and then slowly spread to all parts of United States. The film explains—through visual pedagogical tools­—that vampires created slavery so that they had a fresh food supply.

Lincoln's trusted companions Will Johnson (Anthony Mackie), Joshua Speed (Jimmi Simpson) and his beloved Mary Todd (Mary Elizabeth Winstead) bring dimension to the story. Sometimes, you will feel like you have fallen into the third dimension. At other times, you will feel hints of brilliance when the story artfully combines a bit of history with yellow-dog sensationalism. But then, some overwrought notion of spectacle (the train scene comes to mind) splashes a dose of cold water on the slightest germination of anything remotely exceptional.

The movie reminds us that "(h)istory prefers legends to men. It prefers nobility to brutality, soaring speeches to wild deeds. History remembers the battle, but forgets the blood. However history remembers me before I was President, it shall only remember a fraction of the truth ..."

There isn't even a fraction of truth in this film, but then what did you expect from the title?