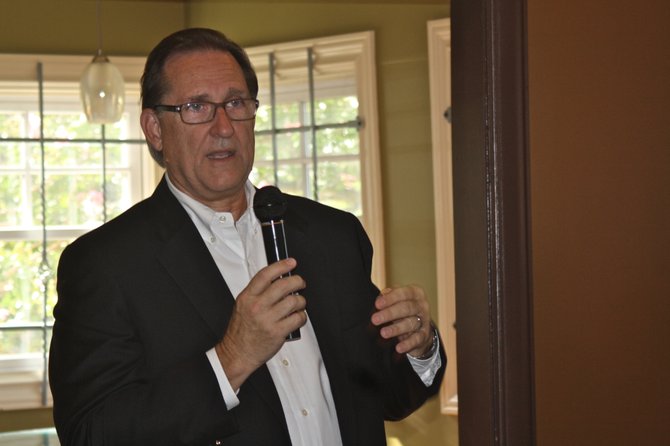 Many west Jackson citizens and community leaders let Chartre Consulting know this morning that they are not happy with the developer's plan for a mixed-income development near Jackson State University.

David Kelly, a public relations consultant for Chartre, spoke at Koinonia Coffee House's Friday Forum about a plan to build more than 150 mixed-income townhouses along Dr. Robert Smith Sr. Parkway. Dozens of citizens, most of whom do not like the Oxford-based developer's plans, grilled Kelly with questions for more than an hour.

Friday Forum is a weekly event at Koinonia. Most speakers hang around after their parting comments to talk with participants. When Kelly was done answering questions, he quickly headed for the exit.

Several citizens voiced concerns about the housing development not being what the people of west Jackson want as their gateway to downtown.

deborah Rae Wright, who does not capitalize her first name, started Best FOR* West, a community group specifically aimed at getting what the people want in the area of the proposed development. She said west Jackson needs more retail and economic growth. Specifically, she said the area needs a high-quality grocery store.

The city, county, state and agencies like the Jackson Redevelopment Authority should be creative and innovative with new development ideas, Wright said.

They (should not) just say, 'This is right and wrong', (but) 'This is how it can (be)," Wright said. "Jackson should not be happy about getting a new thing, be it a hotel (or) a building. It needs to be excellent and innovative. We've settled too often for getting a new something that is not innovative, that is not excellent, that doesn't make anybody want to come see it. We need to be making stuff that people get off the highway to see, because it's lit up at night. We need to have things that are made to where people from Madison are even going to come and say, 'I've got to see this.' We don't think that way."

She said that at a previous meeting with Kelly, she asked him about creating retail in the area. "He said, 'deborah, you need to keep an open mind,'" Wright said.

Lee said he was surprised Kelly showed up for the meeting, with all the negative input that citizens have been voicing.

"This is not the right development for this piece of property," Lee said.

The proposal for the development includes townhouses in three income brackets: low income, workforce and market rate. Chartre would build all the townhouses by the same specifications, Kelly said, but in groups by income bracket.